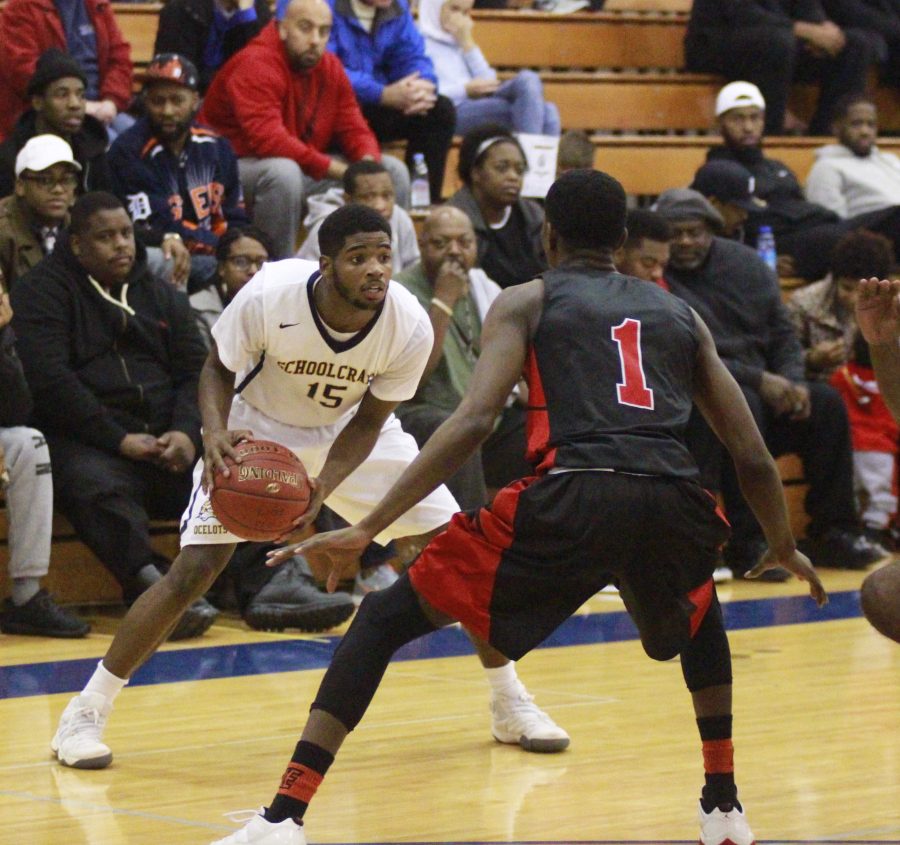 Men’s Basketball wins five of six
By James Paxon, Sports Editor
The Men’s basketball team has started the 2016-17 season by pulling away from most of their competition. Through the first six games, the offensive powerhouse Ocelots are 5-1 and are undefeated at home with a record of 2-0. Schoolcraft has high energy and has the momentum to keep winning games according to Sophomore Forward Tariiq Jones.
“We have played great games so far. We came out with energy with our starters and our bench players help keep the energy in the second half,” said Jones.
Jones has shined coming off the bench by averaging 8.4 points and 5 assists per game in the addition to what Schoolcraft has been able to do in the first six games of the season. The team recently played Kalamazoo Valley Community College (KVCC) and Grand Rapids Community College (GRCC) on Nov. 18 and 19 at the KVCC Tournament.
On Nov. 19 Schoolcraft played host Kalamazoo Valley Cougars in Kalamazoo, Michigan. This game was coming off their first loss of the season to Grand Rapids the night prior in a close game where Schoolcraft missed key opportunities to win and ended up losing a 72-70.
The game started with the Ocelots utilizing their fast pace offense and scoring points without wasting a lot of time. They have scored a lot on fast break opportunities with dunks, lay ups and quick o f f e n s i v e plays. The first half was full of the Ocelots showing they could pass the ball around rather than one person taking control of the game. Schoolcraft ended the first half with a 29-point lead with the score of 50-21.


Schoolcraft entered the second half utilizing primarily their bench players looking to close out a win with a 30-point lead. Kalamazoo tried to comeback and keep up with the fast Ocelots, but their attempt fell short. A big help for them was J.D Richard who came off the bench in the game and scored a team high 19 points. In addition to Richards’s, a big asset in this win was freshman guard Delo Hansbro who ended the game with 20 points and seven assists. The game ended with a comeback attempt but it wasn’t enough to beat the Ocelots. Schoolcraft went home with an 81-62 win over the Cougars.
“We have to take care of the ball better and work on our help side defense we got sloppy in the second half, the more we work on that we will be very successful later in the year,” said Head Coach Abe Mashhour.
Schoolcraft is looking forward to the games coming up in middle December when the Ocelots travel to Jackson Community College Dec. 7 and play Lansing Community College at home Dec. 14. Lansing is currently 6-1 and much like the Ocelots they have had no issues with most of their opponents. Last season Lansing was the Western Conference champion and had an impressive record of 31-5. These next few games before holiday break will help determine how well the team will do in the second half of the season and if they can win the conference.
“The closer we are as a team and the better team bonding we have the better we will do as a team and on the basketball court. I think with our team chemistry we can go very far and we can be a great team,” said freshman guard Walt Kesler.
For team schedules, rosters and game results go to www.mccaa.org.
Delete Image
Align Left
Align Center
Align Right
Align Left
Align Center
Delete Heading