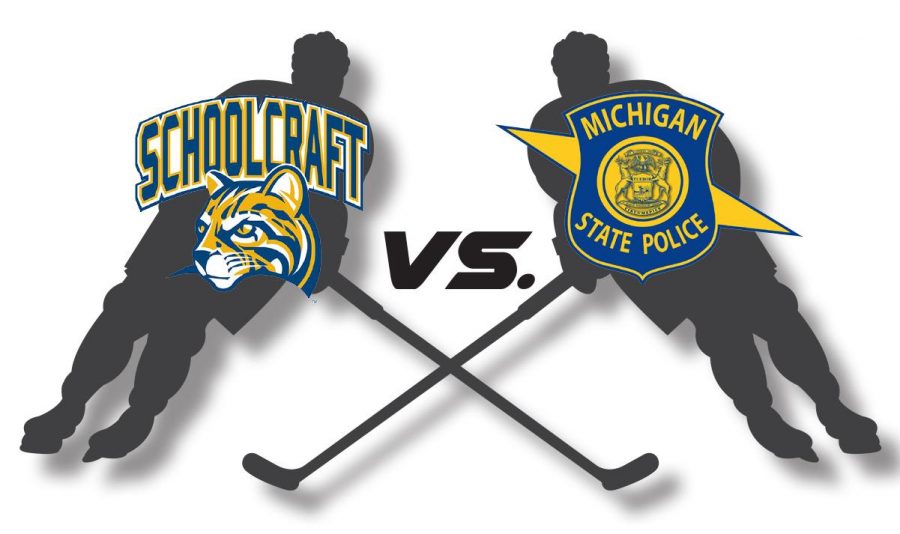 
As the Schoolcraft College Hockey team’s 2016-17 season comes to close, the team is taking to the ice one more time against a rather special opponent.
On Friday, Feb. 24, 2017 at 3 p.m. the team will be hitting the ice to play a charity hockey game against the Michigan State Police at USA Hockey Arena in Plymouth, Michigan. Tickets for the game are $8 in advance and $10 at the door. Doors will open at 2 p.m. Proceeds from this game will benefit the Michigan State Police Fallen Trooper Fund. To preorder tickets call the Student Activities Office at 734-462-4422. All members of the Schoolcraft team are also selling tickets in advance.
One hundred percent of the proceeds from the game including ticket sales, 50/50 raffle and Chuck a Puck will go to The MSP Fallen Trooper Memorial Fund and Michigan State Troopers Assistance Fund.
A ceremonial puck drop will take place prior to start to the game with State Police and College officials in attendance to help with the honors. Schoolcraft’s own April Hudson will sing the national anthem and the game will take place from approximately 3:05- 5:20 pm. This is the first annual game with all parties looking forward to future match ups in the years to come.
“With this only being our second year as a college hockey program this is certainly one of our biggest accomplishments. Everyone on the team has jumped on board as far as selling tickets and actively looking for sponsors. We are excited for the opportunity to make a difference and contribute in the Michigan State Police Fallen Trooper Fund,” said Schoolcraft Assistant Coach Andrew Lindsay.
The Ocelots chose to raise funds for the Michigan State Police Fallen Memorial because it honors those who gave the ultimate sacrifice for the citizens of Michigan. This incredible honorable cause is worth recognizing. The team believes it is important to give back to the community in as many ways as possible, those who keep the community safe especially. The State Police has a hockey team that plays other games throughout the year that are for charity, so the Schoolcraft hockey team thought it was a perfect match for them.
“The State Police hockey team consists of elite players whom have played junior, college, and professional hockey. It is going to be an exciting game for the community and us. We are incredibly honored to have this opportunity and it is for an amazing cause,” said Lindsay.
The event is supported locally by the following businesses and Schoolcraft College departments: Schoolcraft Student Activities Office, Schoolcraft Career Center , Schoolcraft Learning Support Services, SC Media Center and the Schoolcraft College Sports Network, Comcast, Krave Salon, Burger Fi, The Looney Baker, Michael’s Hair Salon, Scott Adams Residential, Dr. Papalia, Zukin’s Rib Shack, Coach’s Corner, Blue Line Nation LLC, Leo’s Coney Island Westland, Handy Mart, Jonna’s Market and Sienna Cleaners.

The Fallen Trooper Fund
According to the Michigan State Police website, the Michigan State Police Fallen Trooper Fund was established to honor those who have fallen in the line of duty. The funding campaign began in the fall of 1999. Groundbreaking for the Memorial began in the late spring of 2001. The dedication ceremony was Oct. 16, 2001. With the help of the Michigan State Police Troopers Association, a special Michigan State Troopers Assistance Fund was established to handle all contributions for the Fallen Trooper Memorial.
Since 1917 when the Michigan State Police were created every member takes an oath to, “preserve, protect and defend,” the Constitution as well as the traditions of the MSP and the public safety for the citizens of Michigan. 52 members have fallen in the line of duty. This fund is a way to honor, teach and inspire future generations with the last full measure of devotion and honor these members gave.
This memorial was constructed on the ground of the Michigan State Police Training Academy near Lansing and was funded entirely by private donations. For more information on this fund visit the Michigan State Police website.
“All of us troopers have been playing since three or four years old and hockey has become a way of life for many us,” said Michigan State Police Trooper Rob Lindsay. “The goal and outcome of this game is to have more events like this in the future and raise money for all the men and women who lost their lives in the line of duty doing the job they love.”
Schoolcraft College Night at USA Hockey Arena
Following the completion of the charity game there will be a hockey game featuring the USA National Team Development Program u18s and Arizona State University. Puck drops at 7 p.m. Schoolcraft students who bring their student ID are eligible to purchase $5 tickets to the game at the door. Tickets for all others are $10 for executive reserved seating and $12 for center ice seating. For more ticket information call USA Hockey Arena at 734-453-6400 or visit usahockeyarena.com.
So grab your friends and head over to Plymouth for a hockey doubleheader and some fun. The day is going to be a fun experience for everyone involved and will help an amazing cause. 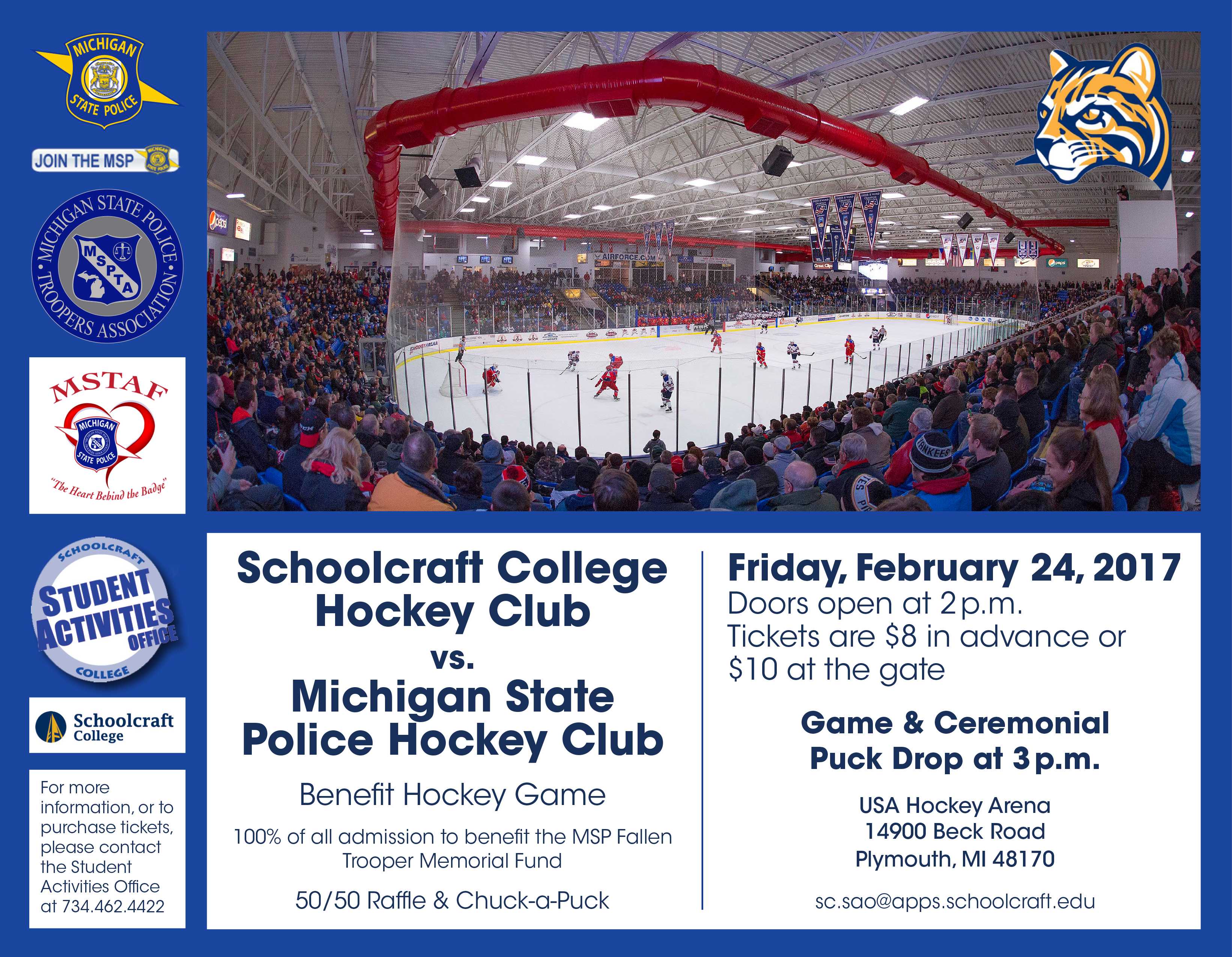