The International Agenda holds its Art and Writing Contest
By Emily Espinoza and Ken Narita, Campus Life Editor and Staff Writer
There has never been a more appropriate time to creatively expresses current, international issues or truths about the current state of our world. The official magazine of the Schoolcraft College International Institute (SCII), International Agenda, has been utilizing the artistic capabilities of the Schoolcraft College student body to showcase the effects of challenging times in a rapidly changing environment.
The purpose of the International Agenda is to, “allow students, faculty, staff, and community members to exchange information and ideas about international and intercultural issues, and to delve into these issues in our courses and extracurricular activities,” said Randy Schwartz, chairman of the publication. “The SCII and its magazine actually help to bring the College more fully onto the international stage.”
Scholarship opportunity
The Writing and Art Contest, held by the International Agenda, is gifting a total of $800 in scholarship money to be dispersed amongst a select number of top winners, courtesy of the Schoolcraft College Foundation. All of the work will be published in the semi-annual issue of the International Agenda magazine.
Submissions from categories of both written as well as visual creation are accepted in the contest; first place prizes for writing and art is $250 in scholarship money each, while both second place winners will receive $150 in scholarship money. Before participating in the contest, one must first submit an application before the deadline on Monday, Apr. 3, 2017.
Last year’s contest
Last fall of 2015, the International Agenda received four writing submissions and twelve art submissions. This year the magazine is hoping to even further enrich the winter 2017 issue through creative and thought provoking pieces. Entries can be new or old work done for classes previously.
Last issues first place in the writing category was given to Leigh Young, an English major from Canton, MI. She wrote a short story in the first person perspective of a woman in an abusive relationship. The story begins with the woman calling 911 after defending herself from her husband and ultimately resulting in his death. Young writes about the emotions this woman goes through as the police officers come to her house. In the end the woman is taken to custody and she sits in the back of the police car as she says to one of the officers, “Now what?” For this incredible short story Leigh Young took the first place prize in writing of $250.
The artwork first place winner in last issues International Agenda was Juria Takei, a Digital Art major from Novi, MI. The entry was titled “Worldwide Flooding.” The artwork used graphics to bring attention to global warming. It was formerly a project for a Computer Graphic Technology class at Schoolcraft.
Donald A. Ryktarsyk founded the International Agenda in 1996. The publication had a short two-year run until 1998. In 2007, Randy K. Schwartz from the Mathematics department at Schoolcraft brought the International Agenda back to life. An editorial committee currently runs the publication with Randy Schwartz as the Chairman.
Judging Criteria
A panel consisting of Schoolcraft College faculty and staff volunteers will judge all of the entries. Each submission will be critiqued based on three judging criteria according to International Agenda Editor, Randy Schwartz.
“The three judging criteria are content, how well the submitted work speaks to international or cross-cultural issues, originality, and appeal [or] style/aesthetics of the work,” said Schwartz.
In order to have a chance at winning the Writing and Art Contest, students must fulfill a set of necessary requirements; some of which include mandatory enrollment in either the fall 2016 or winter 2017 semesters at Schoolcraft College.
First and second place winners of the contest will both receive a sum of the scholarship money prize as well as have their entries published in the winter 2017 issue of the International Agenda along with all of the other entries submitted.
Although winners are greatly praised, panelist judge, Sarah Olson, said the contest is all just part of a bigger picture. “ The contest is an extension of the International Agenda’s focus on raising awareness of other cultures. When students enter the contest they are required to research an international issue in depth.”
The 48 page magazine can be downloaded freely as a PDF off of the International Agenda website or printed in black and white from hallway drop-boxes around campus. Here, students can celebrate the creative talents of members from their very own community, while still admiring and discussing different pieces of international magnitude.
“The subject matter can be anything that deals with cross-cultural material, such as an aspect of another country or culture, the impact of other cultures within the U.S., or a treatment of a global issue such as the environment, trade, health, or human trafficking,” said Schwartz.
For more information on the Art and Writing Contest as a whole or even on the International Agenda magazine itself please contact editor Randy Schwartz by email at [email protected] or by phone at 734-462-7149. 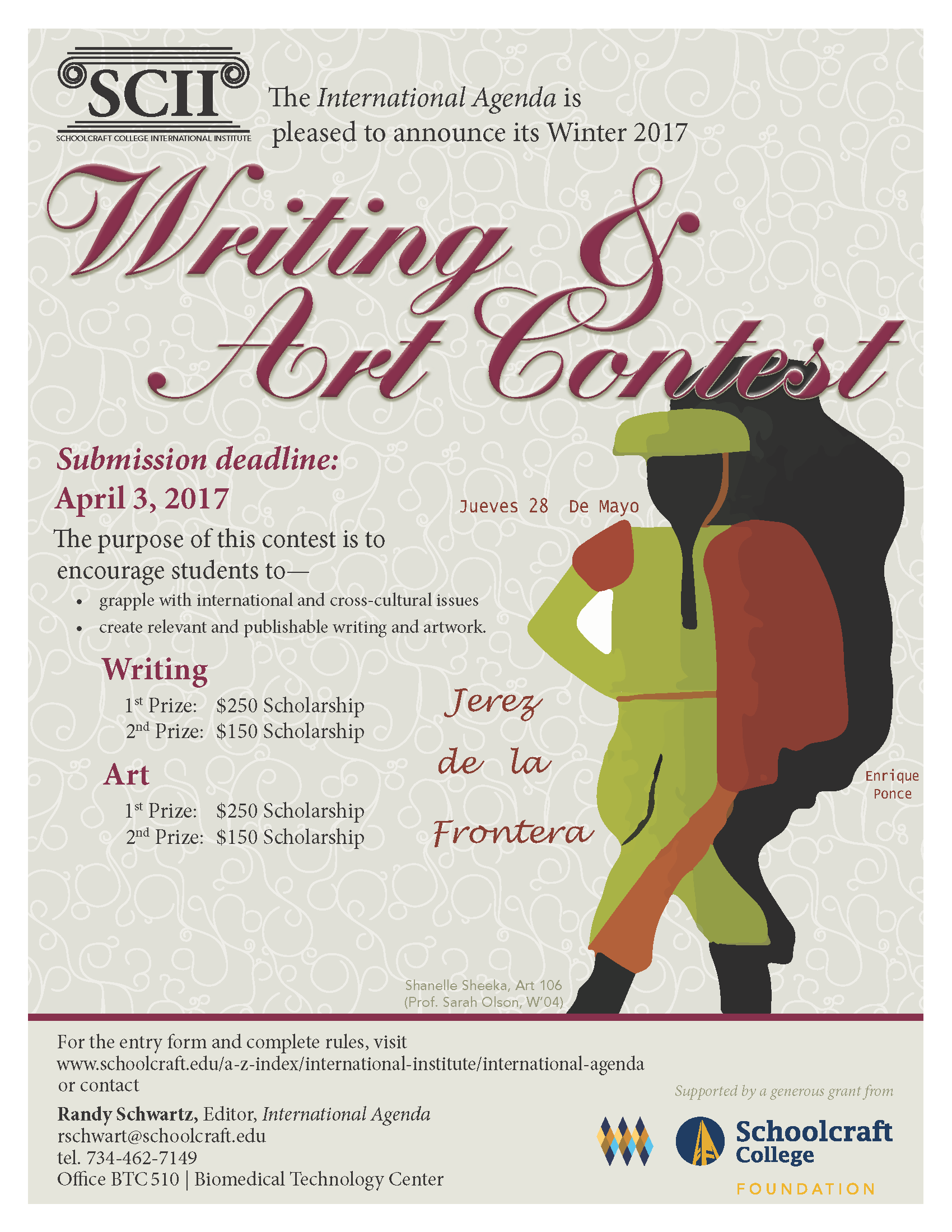