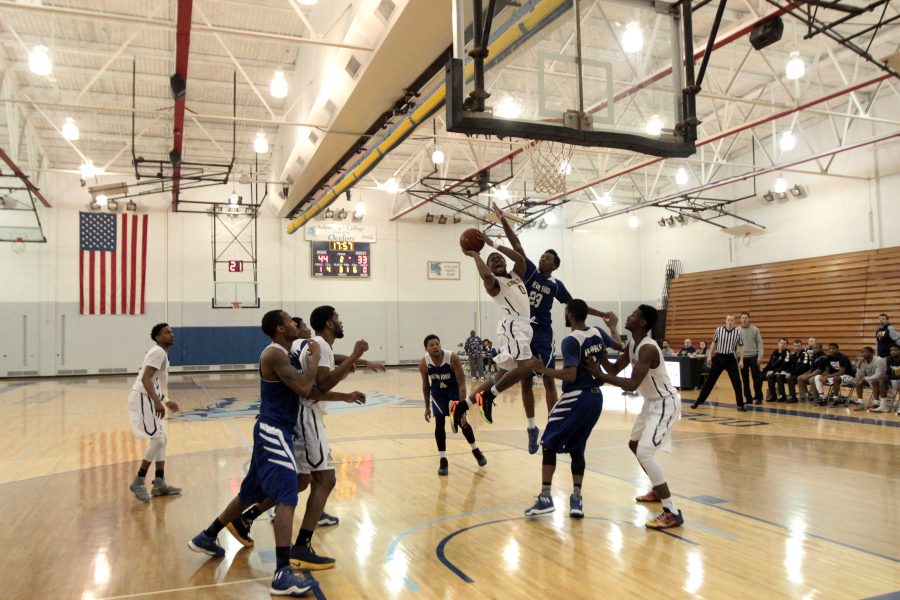 
Nearly one month ago on Jan. 11, 2017, the Ocelots fell to Henry Ford College Hawks in a close game, 83-80. After losing that game, the team was looking for revenge. Schoolcraft (9-2,17-5) wanted to come out on Saturday, Feb. 11, and make a statement against the visiting Henry Ford (4-6,7-13) and they did. The Ocelots won 87-66. The Hawks had a tough time holding on to the ball turning it over on multiple possessions.
“Proud of the team so far and all they have accomplished; but I hope the team still continues to become more of a family and closer,” said Head Coach Abe Mashhour.
Early in the first half Schoolcraft freshman guard Armani Tinsley knocked down back-to-back three point field goals to put the Ocelots up 8-2. Sophomore forward Charles Penn also got going by being aggressive on the offensive end with four offensive rebounds that resulted in four points for the Ocelots.
Late in the first half Penn got shook up by a nose injury, but remained in the game and continued to contribute points. Penn went back in the game late in the first half and ended as the points leader for the Ocelots with 16.
Heading for halftime freshman guard Delo Hansbro attacked the Hawks inside game by scoring on a one-on-one possession and then driving to the lane untouched on the next possession.
“We have been working on playing together and being unselfish. When we play together as a team we are one of the best in the country,” said Hansbro.
The defense for the Ocelots showed up by them switching from 3-2 to a 2-3 on every other defensive possession and resulted in the Hawks only taking outside shots when they were open.

Going into halftime the score was 41 to 25 and Hawks Head Coach Anthony Woods knew for his team to remain in this game they would have to cut down on the turnovers and have better possessions with the basketball.
The second half was similar to the first. The Ocelots largest lead was by 22. The middle of the second half the Ocelots went on a 12-2 run forcing Head Coach Anthony Woods to call a timeout. Throughout most of the game the Ocelots pressed the Hawks coming out of timeouts, free throws and turnovers, which bothered the Henry Ford and cost them to turn the ball over twice on back to back possessions. Five Ocelot players finished in double figures. Charles Penn had a game high with 16 and Tariiq Jones finished with 14 points and 10 rebounds.
“The defense was great I thought we played hard with our press and really got under their skin.” said Jones after the game.
The last win against Henry Ford clinched Schoolcraft a berth in the Region XII playoffs. The next game for the Ocelots will be on Feb. 22 against Delta Community College.
For more information on team schedules, stats, and scores go to www.mccaa.org.
Delete Image
Align Left
Align Center
Align Right
Align Left
Align Center
Delete Heading