Breezing past the competition 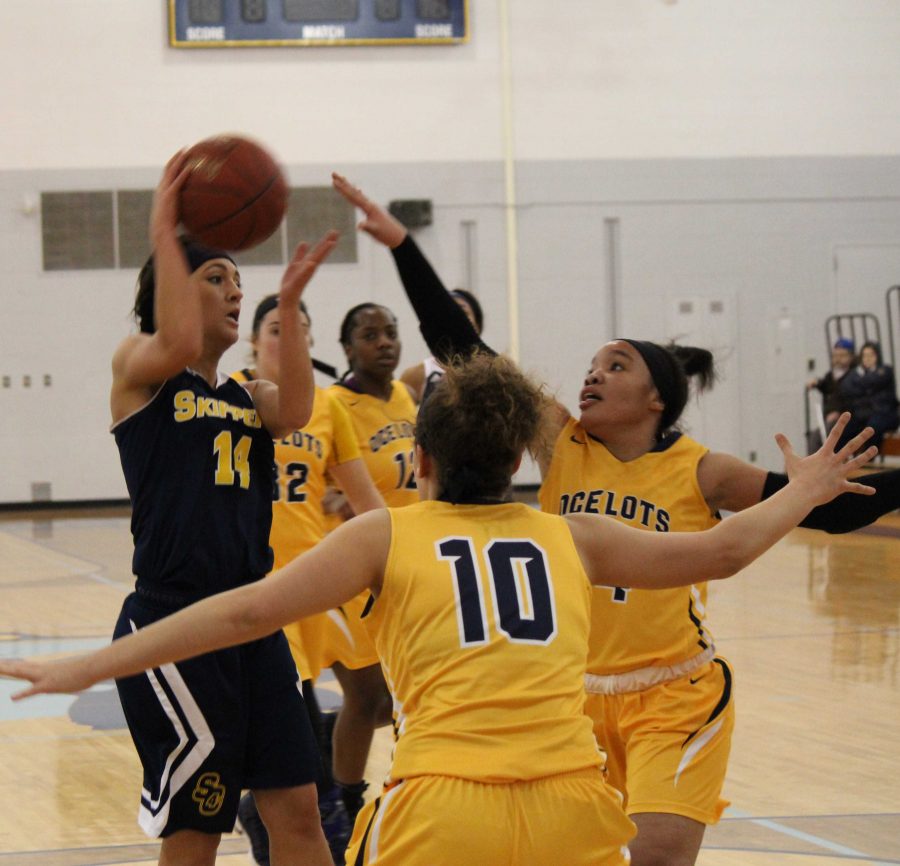 The Women’s Basketball team bounced back after their loss Macomb (Jan. 28), winning two straight against Alpena (Feb. 1) and Wayne County (Feb. 4). The team was looking to continue their streak against the Oakland Community College (OCC) Raiders Feb. 8, 2017 and was able to do so with a 95-51 win.
The Ocelots have continued to be victorious on their road to the playoffs. After starting out this season slow, the Ocelots are currently in second place in the Eastern Conference of the Michigan Community College Athletic Association (MCCAA) with a record of 8-1 and 9-14 overall. The team has also secured a berth in the National Junior College Athletic Association District H tournament.
Head Coach Kara Kinzer says the sudden success is because of their defense. “Our defense has cliqued.” Kinzer said, “we were able to hold Wayne County to only 11 points.”
The team together was able to keep the turnovers down to only 12 against Oakland. Kinzer was really proud of her team for that. “We took care of the ball well and kept the turnovers low,” she commented.
Heavy hitters sophomore forward Jade Smith and freshman guard Victoria Robinson had game highs of 16 points helping the Ocelots to their season high 95-point win. Robinson also had a game high 7 assists and has played phenomenal the entire season along side Smith.
Smith has found her rhythm along with the rest of the Ocelots. She plays an important role in the Ocelots offense, making herself a big presence in front of the hoop. She is able to make herself an option on nearly every play by fighting for a good position. If she doesn’t get a good look at the rim then she is able to keep the ball moving with her passing ability.
“Sharing the ball is very important to us,” said freshman guard Taia Parker. Parker preaches those words ever game and this game is proof. Having six players score in double digits, the team has proved how important sharing the ball is to securing wins.
Parker plays another big role for this squad. She was able to light up the scoreboard again against OCC, scoring 14 points, but she also had 6 assists. Parker is turning out to be one of the leaders on this team and has found her role in running the offense.
Parker’s abilities don’t stop on the offensive side of the ball, but defensively she is a force to be reckoned with. Parker’s speed makes it hard for her offensive opponent to get past her and her strength allows her to fight around screens that should slow her down, but they don’t.
With only four games left in the regular season the Ocelots are playing lights out defense and their offense is firing on all cylinders wreaking havoc for their opponents.
For more information on team schedules, stats and rosters go to www.mccaa.org.