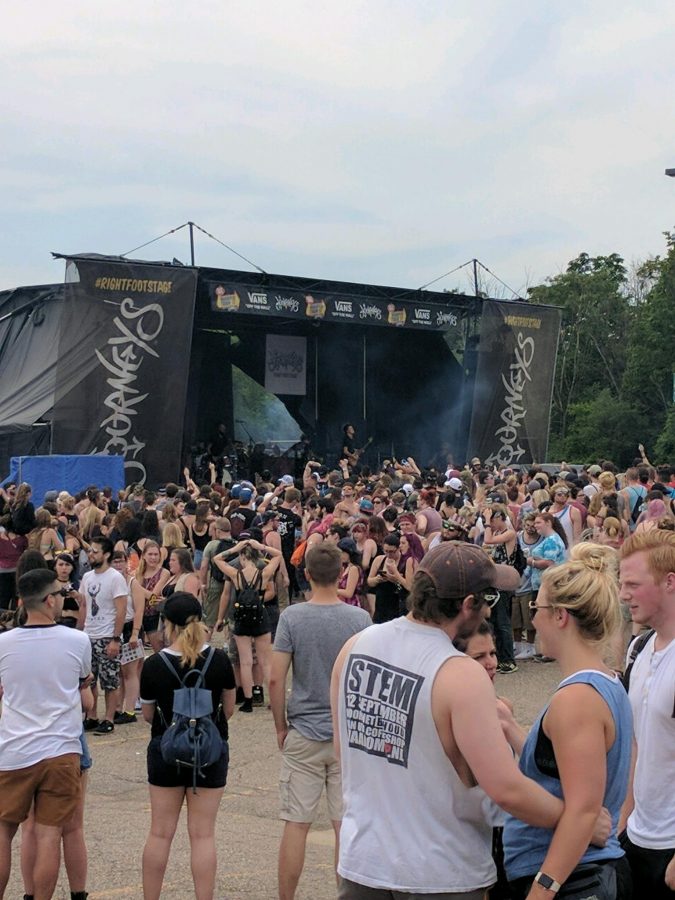 Largest traveling music festival in the U.S., is back for its 23rd year
By Quinn Storm, Editor-in-Chief

The summer months is the time for music lovers to come together at festivals and appreciate the art together. Friday, July 19, 2017, was no exception as Van’s Warped Tour invaded the Palace of Auburn Hills for a jam-packed day of alternative music.
“I’ve actually been to a lot of concerts and festivals this year. I think summer is such a fun time to go to these types of things. I like the outdoor setting and being able to be with friends and bond over the music and just have a good time. Also, it’s really cool to buy things like t-shirts or apparel from these places because most of the time you can’t find this stuff anywhere else and it’s a neat little souvenir from your fun time,” said Jenna Gibbons, a Grand Valley student.
Warped Tour is a traveling alternative rock festival that makes stops in cities throughout the United States and Canada each year from June through August. It is the largest and longest running rock festival in North  America. The tour made its 2017 debut on June 11th in Seattle, Washington, and will conclude Pomona, California August 6th.
“I’m always super excited for the Warped Tour. I’ve gone the past four years. It’s cool because there’s always different bands playing and all my friends like to come with me and hangout and listen to some cool music,” said Lily Kananen, a seasoned Warped Tour attendee.
This year, the Vans Warped Tour headliners included Andy Black, Beartooth, Dance Gavin Dance, I Prevail and New Year’s Day. The Auburn Hills tour stop, consisted of 7 stages and the set times ranged from 11:30 a.m. to 8:30 p.m. with each set being about an hour in length.
Each stage played 8-11 bands, and often the stages next to one another would play at the same time, or with short breaks in between. All the stages were setup around the parking lot of the Palace and also various vendors and sponsors had booths set up around the whole stage.
“Places like this usually aren’t my ‘thing,’ but I came to this because my friends all wanted to go and I’ve actually had a lot of fun. It’s more about being with people that you like here and having a good time together. Even though I don’t listen to these bands I can still listen now and appreciate their music,” said Isaac Chisholm, current Oakland Community College student.
The atmosphere of being together with a huge group of people that are just as passionate about the music as you are creates a sense of togetherness that you can only feel at a concert or festival. The doors open at 11 a.m., and before then the parking lot is filled with lines of people of all ages waiting eagerly to enter through the doors to see their favorite bands live, all together at once. The weather was picture perfect. It wasn’t too hot, nor too cold, and the sky was cloudy enough that the sun wasn’t overbearing outside. In addition to many food vending booths, there were free water stations where people could fill up their bottles or camelback backpacks to stay hydrated.
There were many non-profit booths at the event, including one called PETA2 which was a youth outreach center to support PETA, which is the protection of animals and a pro-vegan organization. Other booths included things that are appealing to the punk-rock aspect: vans clothing and shoes being sold, shirts, shorts and bags from multiple retailers and, of course, many bands had booths where you could buy their merchandise.
One of the bands that connected with festival goers was Attila. Attila is a metalcore band that played on the Journey’s Left Foot Stage. The crowd for this band was one of the largest there, and it was almost impossible to squeeze through the crowd. The set lasted for an hour and, even though there were more bands to see that day, the crowds of people definitely wished that their set would never stop.
Tickets for the day ranged from $35-$40 each, which was on the affordable side for festival tickets.
Overall, this festival is highly recommend for any adrenaline junky who is interested in hard-hitting shows. It has grown from a scrappy festival upstart to a massive production with a DIY spirit, punk rock edge and commitment to showcasing emerging bands.
If you missed out on this year’s tour, don’t worry because next July you can count on Van’s Warped Tour making its annual Metro Detroit stop once again.
Photos by Quinn Storm, Editor-in-Chief