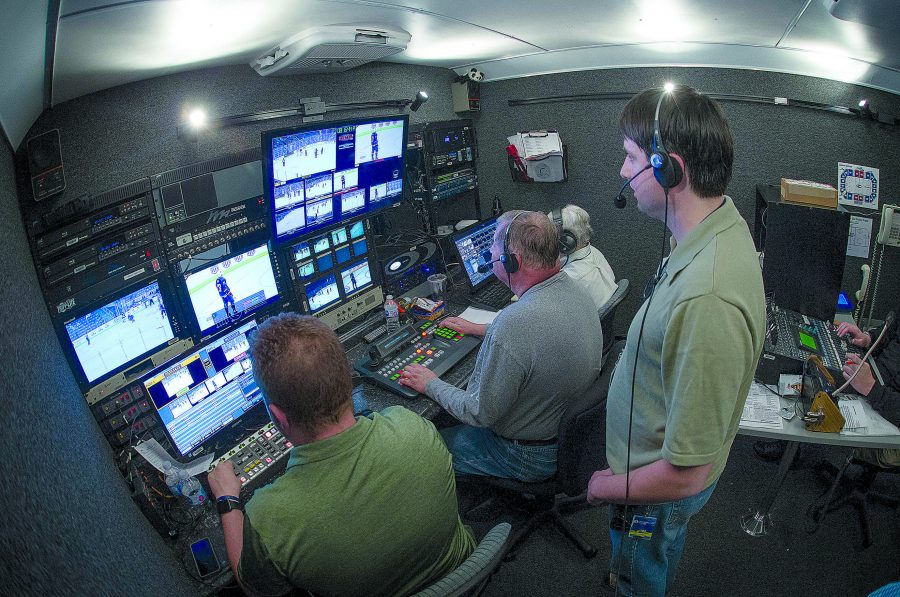 By Lauren Engelhardt Sports Editor
Since the inception of the Schoolcraft College Sports Network (SCSN), Schoolcraft’s Media Department has witnessed an incredible growth to its media coverage in and around the community.


From covering the hockey games of the now defunct Plymouth Whalers, Schoolcraft Athletics, Detroit Music Awards and international hockey games with USA Hockey and the National Team Development Program in Plymouth, Michigan, SCSN has established itself as a broadcasting team that provides professional quality productions to all its clientele.
In 2004, Bright House Cable Company donated a video production van to the College to record and produce many of the Plymouth Whalers games at Compuware Arena. This production truck served as command central to making each production happen.
Like many things in life there comes a point where growth outgrows space. The truck was only 20 square feet on the inside making it uncomfortable for multiple people to work inside the truck simultaneously. The truck was also deemed not safe and rusting due to reaching its life span.
This past May, SCSN was able to purchase a new production truck that would provide the proper space needed for its expanding production services. The interior of the new truck is now 24 square feet. The inside is practically double the size of the old one.
The truck came pre-wired. All media staff needed to do was move the equipment from the old truck into the new one providing a seamless transition. Meaning, there were no technology changes associated with getting the new truck. The truck houses state of the art equipment which allows for HD video editing, stores multiple cameras, houses graphics and audio stations and a score box with approximately 12 to 13 people working in the van at one time comfortably. It is transported to production sites such as the Schoolcraft Athletic fields and even to USA Hockey Arena.
“The truck is a resource to promote the college and to assist students as well. One big reason that the upgrade to the trailer was essential for Schoolcraft was that it will help put the college’s name out there, promote the athletic programs around campus and give students the opportunity to work with the community,” said Director of Media Services, Samuel Gooden.
The importance of this upgraded equipment ensures in the continuation of producing professional full service productions for local sporting and community events.
SCSN also shows some of their work through Comcast on channel CN900 on live or tape delayed feeds. The college also hopes to partner with cable company “WOW!” in the near future.
This production truck also aids in giving students hands-on experience in broadcast journalism. It is used as a learning tool to help further a possible career in the field of video production. The video production club has been a part of the Schoolcraft campus on and off for about 10 years. Anyone can be involved in the SCSN production crew including Schoolcraft students and any community members who want to assist in the production.
Students interested should stop by Student Activities Office in the VisTaTech Center lower Waterman Wing and ask about being a part of the Video Production or Broadcasting Club or call 734-462-4422.