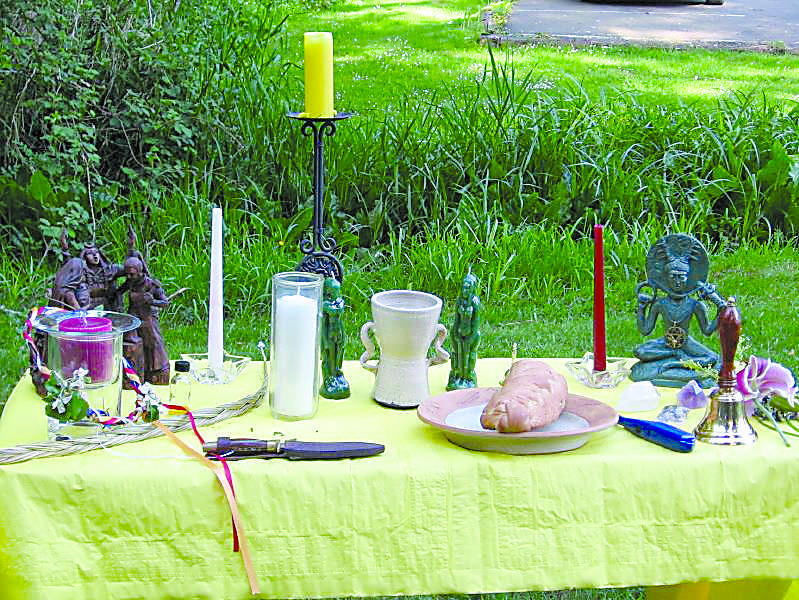 Wiccan altars are typically erected in lush woodland areas with various candles, offerings to the Creator, and other personal talismans. (Image from Wikipedia.org)


Being raised Roman Catholic, any mention of witchcraft was often met with five Hail Marys and four Our Fathers, if I was lucky.
Before the advent of and practiced alongside Christianity, many diverse religions were common in western Europe as Norse Odinists, Druids and pagan healers, midwives and wise women and men lived peacefully in many country villages.
The launch of the Inquisition caused virtually anyone to be accused of heresy, not only the so called “threats” to the Roman Catholic Church. As a horrific result, many of those healers and wise people came under attack as this hypocritical religious battle sought to portray witches as evil, dirty and hideous as part of their hateful propaganda.
Real witches are nothing like the negative images portrayed since childhood in seemingly endless elements of pop-culture, from “Snow White” to “The Wizard of Oz.” This hateful image typically connects women, elderly people and power with ugliness and evil. It is a disservice to and slander upon a legitimate religion called Wicca or witchcraft.
Chiefly, real witches aren’t Satanists and witchcraft is not and never has been Satanism. In ancient times, it was known as “the craft of the wise,” a benevolent spiritual system that teaches respect for the earth and the worship of a Creator that is both Goddess and God.
Wiccans believe the Creator is in everything, from the trees, to the mountains and rivers and all creatures that share the planet. This belief system fosters deep respect and care for the natural world and all life. They celebrate the changing of the seasons and the phases of the moon while also healing and using natural remedies and spells not of malice but of love, wisdom and harmony.
Oct. 31 is a special day in Wicca as it marks the beginning of the new year, the ancient festival Samhain. As defined by old pagan religions, Samhain is a sacred time to remember and celebrate loved ones who have died. On this night, practitioners conduct
ritual using candles, incense and sometimes music, along with celebratory sweets.
There is no harm in the true fun, Christianized aspect of Halloween such as trick-or-treating, yet witches often come under heavy scrutiny around one of their most sacred holidays. Many public schools, such as Farmington Public Schools, have even banned any images related to the craft so as not to offend other religions that have the dangerous misconception they are Satanists.
Putting down any group of people, especially when you are incredibly misinformed, is a poor way to celebrate any holiday.
It is unclear how many Wiccans there are in the U.S. today, but the 2001 American Religious Identification Survey by the City University of New York found that Wicca was the country’s fastest-growing religion, with 134,000 adherents and still growing now.
It’s time for witches to be given the same respect and tolerance they have always given others, as we too often speak of religious tolerance yet seldom allow the most ancient of religions any respect at all.