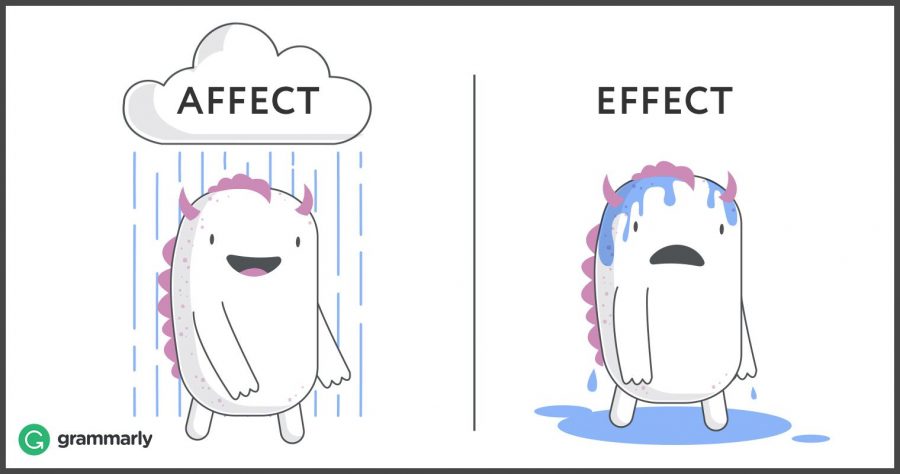 Dear Writing Fellows,
I always seem to have trouble differentiating between the use of “effect” and “affect” in an essay or paper. I would really appreciate it if you could briefly explain how to use the two words correctly.
Please Help,Confused Student


Dear Confused Student,
This is a common problem that many students face when writing essays. “Effect” and “affect” are tricky words that have very similar meanings; however, the big difference is that one is most commonly used as verb and the other as a noun.
Let us start with differentiating between a verb and a noun. A verb is used to describe an action, state, or occurrence. Whereas, a noun is used to identify a person, place, thing, or idea.
“Affect” is usually used as a verb that describes a change due to the act of something or someone. An example of a sentence where “affect” is used as a verb is, “The weather affected her travel plans.”
In this case, “weather” is the action causing the change. There is one instance where “affect” is used as a noun—to describe a facial expression. For example, “The young man with schizophrenia had a flat affect.”
Here the face is replaced by the word “affect” to describe something (making it a noun). Whenever you find yourself writing a sentence that talks about a change caused due to something or someone, it is a clear indication to use “affect.”
On the other hand, “effect” is most often used as a noun. When writing “effect,” you use it to describe a change that results from an action.
In a sentence like, “Weight loss is the effect of diet and exercise,” we see “effect” being used as the noun. It describes the result of an action, which is dieting. Moreover, “effect” is also used to describe its influence on something like, “The medication had a cathartic effect.” It can also represent a form of light, sound, or scenery in a play, movie, or broadcast. For example, “The studio effects are amazing.”
There is one instance where “effect” is used as a verb to describe something that was caused. “The new department head will effect some positive changes in the office.” In this example, the new manager caused (effected) some positive changes, thus justifying “effect” as a verb here.
“Effect” and “affect” can change depending on the situation they are used in; however, “affect” is usually an action and “effect” is the result. If you understand their differences, everything will seem much clearer. Hopefully this was helpful, Confused Student.
If you need any further assistance in the future, please feel free to visit us in the LAC in the Bradner Library.
Best Wishes,
The Writing Fellows
Delete Image
Align Left
Align Center
Align Right
Align Left
Align Center
Delete Heading