“Emancipated though not forgotten” 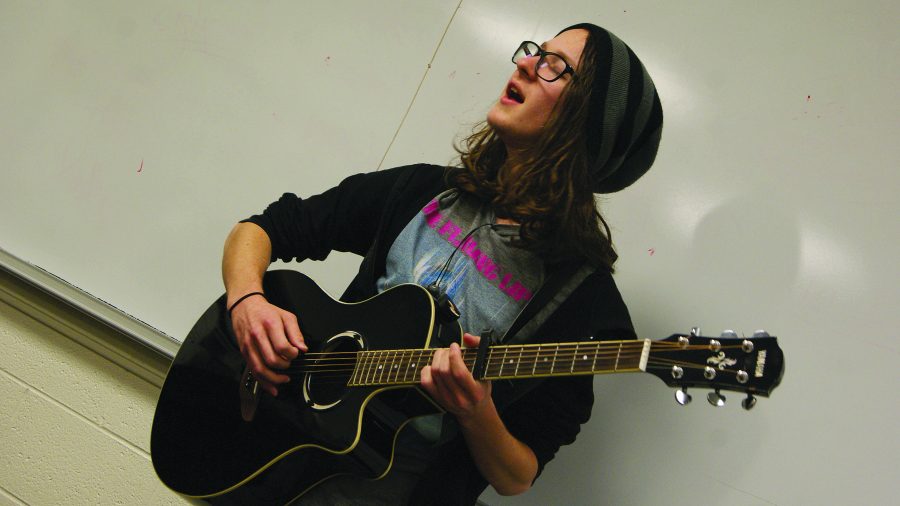 Schoolcraft is the academic home to many talented students and blossoming
artists. As per the invitation of Dr. JuJuan Taylor, Department Chair of Communication
Arts at the college, The Connection capitalized on the opportunity to interview
a rising star, student Rhys Gabriel who acoustically performed original songs “Hey Mother” and “The Pact” live for the interview.
Gabriel is currently majoring in Sound Recording Technology with an evident, soulful passion for music. He is both a solo artist and current vocalist and guitarist for local band Paper Crowns. Gabriel’s debut solo album, “Brindalyn” is currently available
on Spotify with his sophomore album anticipated for release in spring of 2018.
SC: What prompted your interest in music?
RG: As a kid, I was always interested in some of my favorite artists. I think the most important part of music was when my band teacher from middle school gave me an anthology of all the scores of every single Beatles song…I was so blown away that he gave this to me that I wanted to learn every single song off it.
SC: What courses have you enrolled in to further supplement your professional career?
RG: Music Theory, Music and Art History and fast piano. In high school, I was also taking Music Theory, and I also took five years of band playing the saxophone. I picked up guitar around eighth grade and started playing in a band last year.
SC: How has the Fundamentals of Speech Communication Arts course helped you in your future success?
RG: The importance of interviews with other people is extremely important to me. I’d rather be professional in my communication with other people rather than come off as a person who likes to flaunt their fame. I think that preparing speeches is going to be very important.
SC: What’s your ultimate goal professionally?
RG: I have a couple, but my two biggest ones are to become an audio engineer so I can mix my own stuff and other stuff as well, and just go ahead with my music and make what I want…and win Grammys.
SC: Who are some of your major musical influences?
RG: I’ve developed a huge taste. My biggest
inspirations right now have to be Iron & Wine, an amazing folk artist and Sufjan Stevens, a guy that was actually born in Detroit and grew up in Michigan and even made an album about Michigan. I look up to him because he actually started his own record label and that’s what I hope to do sometime in the future.
SC: How would you describe or identify your genre?
RG: I’d say basic folk right now, but I am trying to make it chamber folk as I’m trying
to implement strings, horns and other instruments. The music I have made over the past few years can be defined as post-rock, instrumental, jazz, synth wave, folk, rock…so I don’t like to stick to one thing, I like to bounce.
SC: What are some other things you would like our readers to know about you?
RG: People that have a dream should chase after it, even if it seems far-fetched. I didn’t think that I was going to be recording
my own music and playing in multiple bands. I never thought I’d be onstage with some of my best friends and amazing
performers, but I just pursued it over time and eventually got there.
Having dedication and time is huge in life and I think that everybody should, if they have a dream, just pursue it. If they think that they’re less than that, they’re not.
SC: What would be some advice you have for future artists?
RG: I know that a lot of people are afraid to play in front of people, which is the most important thing about music. Even if you’re afraid to play in front of people, there’s not going to be a single person that isn’t going to at least enjoy a little bit of it. As an artist, I’ve always been afraid of people not liking my stuff, not finding it appealing or being offended by lyrics. I don’t think that anybody should have any worries about playing in front of people. l