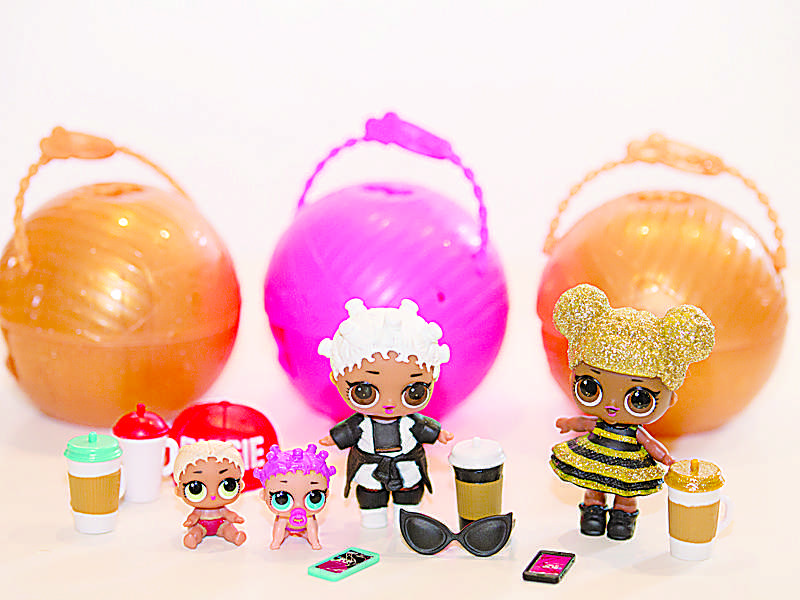 The opened dolls with all their accessories. The smaller babies are the little sisters while the larger ones are the big sisters. Not knowing what you are buying makes this toy addictive, not unlike gambling. (Image from mommyoutsidethebox.ca)

L.O.L Surprise dolls leave much to be desired
By Alexis Tucker, Managing Editor


Every year there is a new hit toy that sells out the moment they hit the shelves. This Christmas season’s toy was the L.O.L. Doll made by MGA Entertainment, and the craze continues into 2018.
Over 2.5 million of these dolls were sold in about five months last year, according to Forbes. This little doll is packaged in seven wrappings in a hand-sized ball, and there are three kinds to choose from the pets, big sisters and little sisters. All of the wrapping is covered with pictures of the little dolls with things that say “Unbox me!,” “Bet ya can’t find me!” and “Take me home!.”
But yes, there are seven plastic packages that contain various items including the doll, and the child has no idea what they contain until they open it. This can mean duplicates or an undesired doll.

L.O.L dolls aren’t the only “mystery box” type of toy out there, nor was it even the first of its kind. This kind of thing sounds familiar to gamers. You pay money out of pocket for a chance to get the item you really want.
Gamers have pushed against this trend for a while as it is a shady business practice to get more money from the gamer, and it can hinder the actual game, especially the fun of the game.
Gamers find the practice particularly effective against children or gamblers since they don’t have an idea for the real value or get addicted to the chance of getting what they want. For more information about this issue in the video game industry, please read “Let’s end loot boxes” by Christian Hollis in The Schoolcraft Connection’s Issue 7 of Volume 31.
Children are susceptible to this sort of marketing as they collect and play with toys, and it seems children enjoy the opening of the surprise more than the toy itself. These sorts of toys are very enticing to children for those reasons, and it seems companies are taking a play out of game developers’ books to sell as many as possible.
The thing is, toys like this aren’t all that lasting. The craze will fizzle out at some point, but the way young children live now, it may not die out. YouTube appears to play an important role for these toys to continue as children watch people open the toys and discuss them.
Popular channels like “Princess Toy Reviews” get upward of a million to over 13 million views. Gamers watch YouTubers to get an idea if they want a game or not, but for children it’s just a free advertisement for the toy.
The quality of the toy isn’t important to children. They just see cute little toys and people gushing over how great the toys are.
These fads feed into themselves to get so big, just as loot boxes have seeped into so many games. Now, there are many copy-cats to the L.O.L doll, leaving almost an entire aisle aimed at young girls full of these mystery toys.
Loot boxes are a bad practice to gain money in almost all games. These mystery toys are just as bad, especially considering they target children. With loot boxes in games, adults have more sense to say no or to choose a better game and such.
With mystery toys, children want them and parents will buy them. It teaches children that things like that are expected, when people should expect to get what they pay for, which is why there is a huge fight for gamers to root out loot boxes. These mystery toys are not a huge problem, but parents should be wary. Our lives are filled with enough mystery as it is, so why pay for a chance at a super rare doll when you can buy a nice set of Legos?