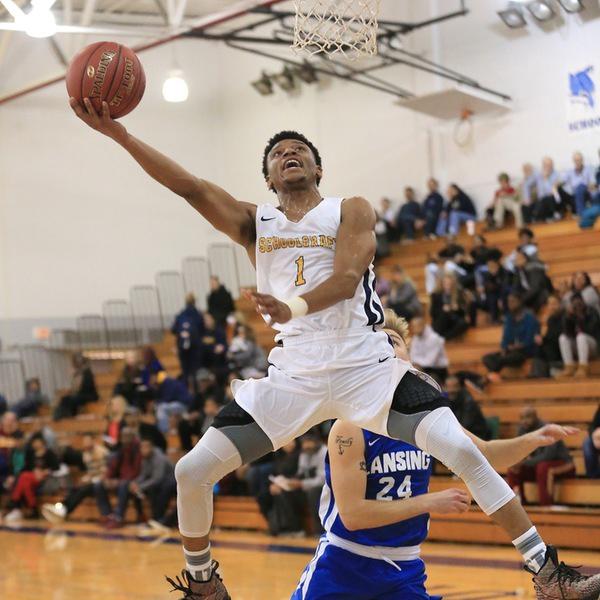 Men’s Basketball ranked No. 1 in NJCAA Division II poll
By Dan Stowell, Staff Writer
The red-hot Ocelots have been firing on all cylinders this season with an impressive record of 7-1 in the Michigan Community College Athletic Association (MCCAA) Eastern Conference and 16-1 overall. As of Jan. 29, the team is sitting on top of the NJCAA Division II polls making them the top ranked team in the country.
This unselfish ballclub has multiple players that contribute on a nightly basis which is why they have been so dominant. Head Coach Corey McKendry takes pride in his players willingness to play a team game.
“The thing I’m most proud of right now is we’re playing as a team… there’s not really one guy that you can key on, a lot of different guys can have success out there.” said McKendry.
The numbers don’t lie either, your Ocelots are one of the top teams in the country in assists averaging just under 22 a game. This diverse ball movement provides opportunities for everyone to contribute. Eight guys are averaging 9.5 points per game or more, while sophomore guard Runako Ziegler leads the pack with 16 a game.
The players understand the importance of teamplay and playing the game one possession at a time. When sophomore guard Phil Nelson was asked their mentality going into each game he responded, “We come in every game focused with the same mentality as every game, just one by one.”
Rising sophomore Trenton Temple has also been a great leader, contributing ball movement to their success this season. Noting the mindset of the team he adds, “Playing the game one play at a time, focus on getting a stop on defense, then making a basket on the other end of the court.” Clearly, coach McKendry has instilled his philosophy into the team.
Pink Zone benefit game
The next game for the Ocelots will be Feb. 6 against the Macomb Monarchs at 7:30 p.m. in the Schoolcraft Gym. It’s always tough matchup against the Monarchs (5-3, 14-6). The last time the teams met was Jan. 5 at Macomb where the Ocelots came out victorious in a naibiter, 95-93. Coach McKendry emphasizes how they will need to lock in defensively against this fast pace, high scoring team.
Come cheer on your Ocelots this Wednesday at 7:30 p.m. Admission is $5 at the door. This game is the annual Pink Zone game where all 100 percent of the proceeds will benefit WBCA Pink Zone and Breast Cancer Research.
Make sure to bring some pink and make lots of noise for your No. 1 ranked Ocelots!