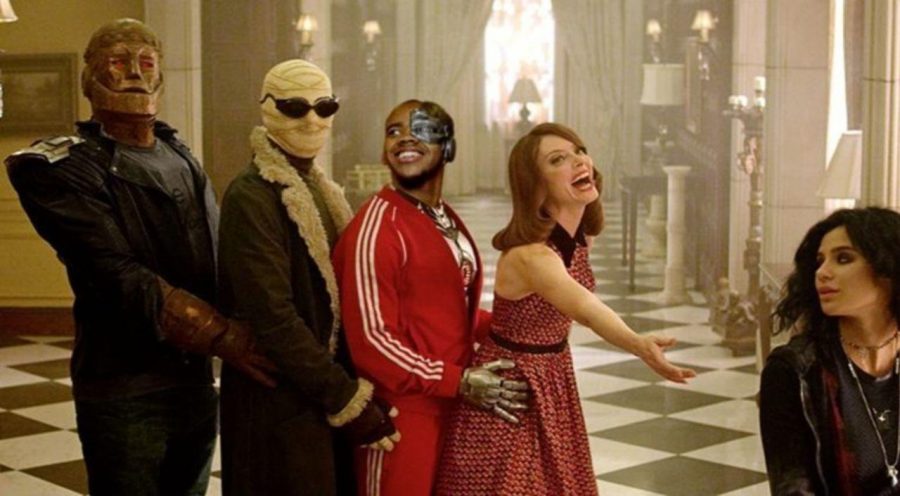 DC’s new series, Doom Patrol, is weird in all the right ways
9/10
by Cody Yarbrough, Staff Writer
Following the success of the shows “Titans” and “Young Justice: Outsiders,” streaming service DC Universe has added another show to its roster, “Doom Patrol.” Can this new exclusive match the quality of the other two? Only time will tell. However, the first episode of the series seems to indicate this show will be something special.
From the beginning, the show literally tells you that it’s different from all other superhero shows. Not because it’s dark and gritty, but because it’s weird.
Even if they hadn’t said anything, everything from the music to the character and set design gives off this eeriness like there’s something strange going on, but you can’t quite put your finger on it.
The excellent acting helps push this feel as well with every character having their own brand of strange that is somehow compatible with the rest of the team’s. Even the main villain (who we only get to see a few seconds of in the first episode) exudes a sadistic vibe. Instead of taking over the world or destroying the universe like the stereotypical villain, he only cares about torturing the Doom Patrol.
Comedy is a huge highlight, with most of the jokes guaranteed to get a laugh out of you. The slightly dark humor and the bluntness of some of their statements perfectly match the atmosphere of the show.
The main story of this first episode is the introduction of each of the Doom Patrol members and it manages to do a really respectable job of it. Even though the episode spends most of its time focusing on Robotman, all the characters get a fair amount of time dedicated to themselves, giving them time to describe their backstory and personality. By the time they are done going over each character’s personal history, it feels like viewers spent an entire season getting to know these characters.
Due to the amount of effort the writers put into developing the characters, there is almost no action in this first episode. Within the entire hour there isn’t one punch thrown. Some viewers may find this problematic especially, considering this is a superhero show. Superhero fans probably would personally prefer an episode filled with important and interesting exposition rather than one with a half-baked story and a crammed in fight scene.
The ending of the first episode focuses on the villains of the series, who appear not only to be far more powerful than our heroes, but far more bizarre as well.
All things considered, the first episode of “Doom Patrol” is a durable start to the series and will make viewers excited to see where the story will go. Though it may not be a heart-racing beginning, the plot is extremely intriguing and enjoyable. The only thing that kept this episode from a full 10/10 is the lack of a good “wow” moment, something that would completely blow its audience away. If you enjoy superheroes, deep characters, dark humor and chilling imagery, “Doom Patrol” is a must see.