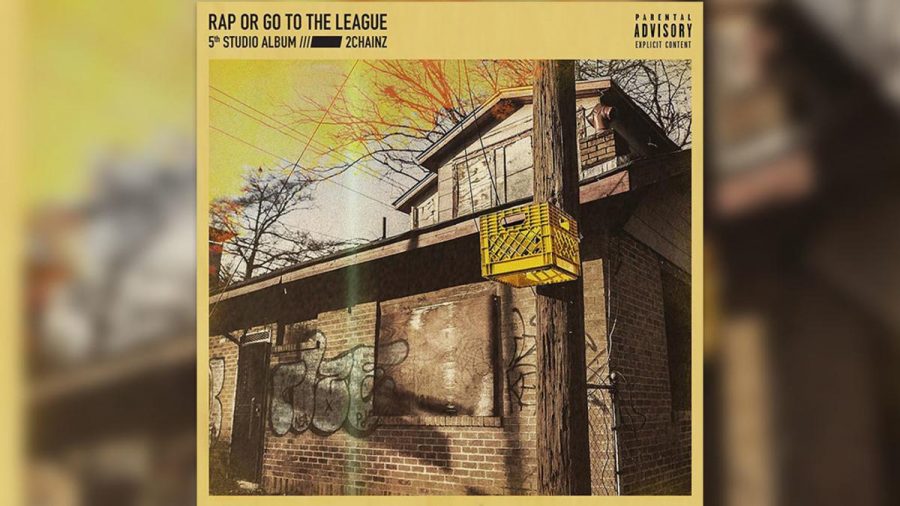 “Rap or Go to the League” shows 2 Chainz’s maturing through music
9/10
By Marvin Poindexter, Arts and Entertainment Editor
From attending Alabama State, to eventually starting a rap group in 1997, to even selling dope, Tauheed Epps known worldwide as 2 Chainz, has come a long way. After being officially signed Def Jam in 2012, Chainz can be considered as one of this generations top rap artist. Throughout the years, Tity Boi has worked relentlessly, releasing hard hitting projects that have proven why Atlanta is a force to be reckoned with when it comes down to not only rap but music period.
In 2017, Chainz dropped his fourth studio LP, “Pretty Girls Like Trap Music,” which showed the Atlanta native attempting to showcase growth within himself as well as in his music. Now two years later, 2 Chainz is back, but with something much more impactful and what could be considered his most intellectual and personal album yet, titled “Rap or Go to the League.”
“Rap or Go to the League” is 2 Chainz fifth studio album released under both the Def Jam and Gamebread labels. In 2017, before the release of “Pretty Girls Like Trap Music,” 2 Chainz stated in an interview with The View that fans could expect to see growth and maturation in his music. “It’s still edgy content,” he said, “but trap music is kinda defined as low socioeconomic background music where you have to hustle to get out.”
Though the project did show creative growth and Chainz evolving as an artist, “Pretty Girls Like Trap Music” comes nowhere near to how impactful and mature sounding that “Rap or Go to the League” is.
In this album, Tity Boi opts to tell a story of sorts that feels and sounds like a conceptual album that is filled with life lessons.
In an interview with The Ringer, Chainz said that “With the title of the album, “Rap or Go to the League,” it’s more of an audiobook type of vibe. It’s free game, you unconsciously just might pick up on some type of knowledge, but in a cool way, you know what I’m saying?” That basically defines what the album feels like. It’s still 2 Chainz, but with some slight modifications.
The opening track, “Forgiven,” talks about a rather serious topic that finds 2 Chainz talking about parts of his upbringing as well as how he used to sell dope. The song also finds Chainz talking about the tragedy of a close friend losing their son: “Got a phone call from Lil’ Fate/ Somebody shot his son/he didn’t make it,” also with lyrics like  “My head achin’/ hands started shakin’/Foul beyond flagrant,” and“He said, “Bro, what I’m supposed to do?”/I paused, remorseful/We been partners since public school/Kids ain’t supposed to die before us.” All these words drive home the heavy hitting feelings behind the origin of the track.
Part of the meaning behind the title of “Rap or Go to the League” stems from 2 Chainz attending Alabama State and being on the Basketball Team, as well as just having a strong love for basketball in general. NBA superstar LeBron James was the A&R of the project as well. The song “NCAA” demonstrates this, but also discusses how NCAA players aren’t getting paid enough, even though teams are being funded by big companies, sponsors and owners.
“Rap or Go to the league” contains features from Young Thug (“High Top Versace”), Travis Scott (“Whip”), Kenderick Lamar (“Momma I Hit a Lick”), which was produced by Pharrell Williams. Other names include Lil Wayne and Kodak Black (“2 Dollar Bill), Chance the Rapper (“I’m Not Crazy”) as well as many more.
One standout song that holds a solid feature comes from the track “Rule the World,” featuring Ariana Grande and produced by Hitmaka. Other than Ariana’s beautiful and catchy hook, what makes this track a standout is the sample that is used, from Amerie’s 2002 song “Why Don’t We Fall in Love.” Before this Collab, 2 Chainz and Ariana have never worked together, even if Chainz did hop on Grande’s “7 Rings” for a remix.
Overall, “Rap or Go to the League” is one of 2 Chainz most insightful album. The project still stays “T.R.U.” to who Chainz is, without drifting away from his usual style. The album is filled heavily with the trap sound that fans of the artist are used to, but while still managing to tell its story without Chainz having to try too hard to showcase growth and maturation.