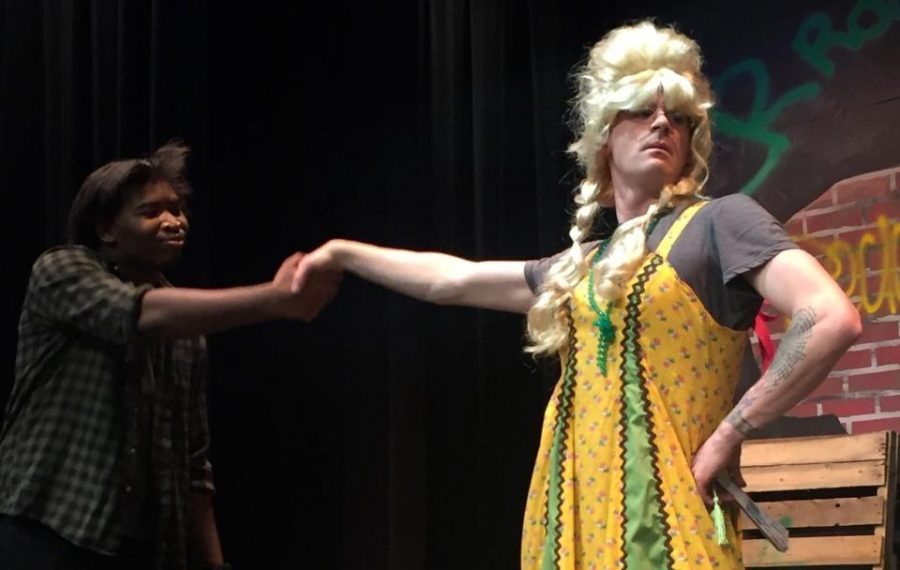 by Christopher Falkiewicz, Staff Writer
If you haven’t gotten a chance to see Schoolcraft’s production of T-Bone N Weasel this weekend is your last chance. The show began performances March 22, and they will conclude this Saturday April 6 with two finals shows Friday and Saturday.
The show is being performed at the Hartman Theatre in The Liberal Arts Building, Room 500.
Doors open at 7:45 p.m., and the play will start at 8 p.m. The event is open to all ages, but it should be advised that the play deals with heavy themes and has a mild amount of cursing that will be censored out at times when needed. Tickets can be bought in person for $15 at the cashier area in the McDowell Student service center or over the phone at 734-462-4596.
“This is a hilarious and lovable play with deep suspense and realism at times when needed in a comedic way,” said Noah Boye, the actor who plays Weasel. “I hope that as people are driving home after the play, they’ll say ‘I’ve never seen that before!’”
Director Joseph Zettelmaier describes T-Bone N Weasel as “a big, silly comedy about people who fall through the cracks.” When asked about how working on the play was, Zettelmaier said, “Amazing. Everyone’s been a dream to work with. I’ve been needing three actors who saw it the way I did, and they’ve been incredible.” Zettelmaier decided to do this play because it’s been something he’s wanted to do for some time, finding the perfect opportunity to do it when he figured that it’d be a good follow-up to the previous semester’s people drama “A Doll’s House” by Henrik Ibsen, given how different it was from this current play.
The play, which was written in 1992, take place in the 1970s in South Carolina throughout many small towns and shows the life of two ex-convicts who seem to have the worst luck. T-bone, played by D’ernest Johnson, can’t stop committing crimes like theft, making him the bad guy of the duo, but he seems to have a heart. Weasel, on the other hand, is the exact opposite of T-bone as he just wants to make a living off doing honest work.
“This play will give people a better outlook on life,” said Johnson. One take-away of the play in his view is “Life might fall apart again and again before it comes back together.”
The play, as funny as it may be, also has its darker moments, such as how the characters are treated throughout the play like being verbally and mentally harassed. There are also heavier tones in the play that deal with racism, so parental guidance may be needed for these moments for the younger members of the audience.
With there being only two main characters, the few background characters that interact with the duo will all be played by one actor David Collins.
The play might open up a new world for audience to enjoy as theatrical productions have the chance to change one’s emotions depending on how it’s shown.
For more information or even information of upcoming events visit www.schoolcraft.edu/theatre/events.