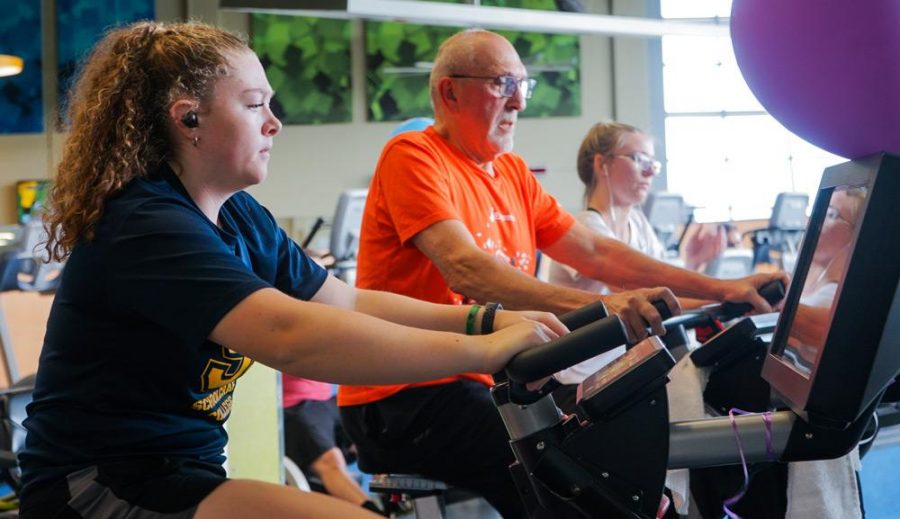 Students, staff, faculty and community work together during the Fall Frenzy to make Schoolcraft victorious

Over the course of five weeks, and 11,516 miles later, Schoolcraft College has been crowned National Champions in the Expresso Fall Frenzy Bike Challenge. Schoolcraft out-cycled 92 schools to claim bragging rights for the seventh annual competition and earned the prestigious Golden Spokes trophy.
Alongside the trophy, the Fitness Center also received $500 from Expresso. This latest victory makes Schoolcraft College the only college to have won three Fall Frenzy championships in seven years – 2014, 2016 and 2019.
“Thank you for all the campus support we received during the Fall Frenzy program this year,” said Patty Donohue Ebach, Recreation Manager at the Fitness Center. “It takes a village to win this thing and that’s exactly what we get every year.  We’re always in it to win it and we can always count on Schoolcraft College to come through for us.”
The competition was performed on Expresso bikes which are fitness bikes in the Fitness Center that simulate courses for bike riders. These bikes connect to the internet and log a biker’s miles to their account.

Schoolcraft had 272 Ocelots participate in this year’s Fall Frenzy, an increase of 35 percent from last year. Thirty-five riders biked more than 100 miles. Twelve of the 35 riders biked more than 200 miles over the course of five weeks. The Fitness Center also provided riders with an incentive to ride more than 25 miles each round of competition by rewarding those that surpassed it free items such as tumblers, water bottles and other fitness friendly items.
At the end of the Fall Frenzy the top 25 overall riders received all-tournament honors. Top honors for Schoolcraft went to Michael Waldyke (451.4 miles), Lou Mascolo (416.4 miles), Jake
Fedewa (402.4 miles), James Cochran (382.3 miles) and Michael Nehring (311.5miles).
“We take (Fall Frenzy) very seriously,” said Matt Cooper, Assistant Recreation Manager. “When I first started at the Fitness Center in 2016, we won, but it was very intimidating.”
Only 16 colleges of the 92 that have Expresso bikes logged in for competition made it into the bracket, the rest of those schools didn’t qualify for the competition. Schoolcraft went into the bracket at the fourth seed after biking 939 miles during qualifiers.
During the Super Sixteen round, Schoolcraft went against Gonzaga University, based in Seattle, Washington. Schoolcraft knocked them out of the tournament biking 1,437 miles to Gonzaga’s 139.
The Electric Eight round had our Ocelots go against Fort Hays State University based in Hays, Kansas. Schoolcraft narrowly defeated Fort Hays biking 2,679 miles to their 2,522.
Then the Ocelots advanced to the Fearsome Four, going against SUNY Canton from Canton, New York. Canton maintained a steady lead going into the second day, but the Ocelots came back and left them in the dust with 2,748 miles to Canton’s 2,037.
The finals was a rematch from 2018’s Fearsome Four. Then, Binghamton University – established in Binghamton, New York – defeated the Ocelots by 86.6 miles. This year the Ocelots came back hungry for redemption, closing it out with 3,762 miles to Binghamton’s 3,600.
“We rode really hard every day,” said Fitness Center student employee, Aliya Blackson – Epstein. “We made sure our riders were staying on a certain miles per hour. That and pure motivation helped us take down Binghamton University. It proves that with teamwork, anything is possible.”
For a full list of all the riders that helped bring the Golden Spokes home, visit expresso.com/Challenge/Team/lFrenzy2019Championship/2889202