Alka-Rocket team to compete in Orlando 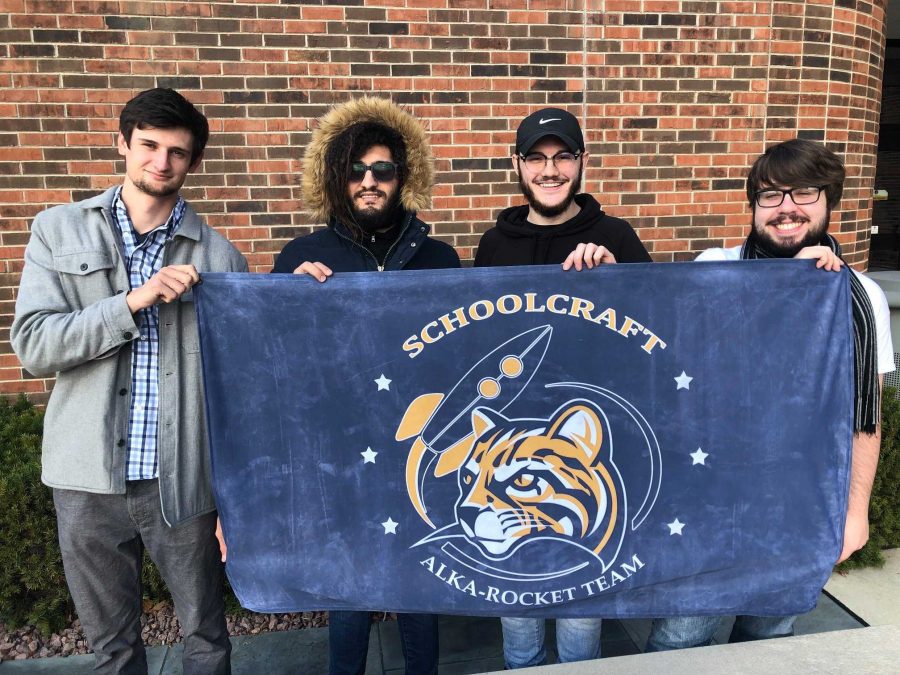 The Alka-Rocket team at Schoolcraft College qualified to compete for $30,000 at the Kennedy Space Center in Orlando, Fla. The competition will take place Dec. 12. The Alka-Rocket team is competing against four other schools around the country to see who can build a launcher to fire a projectile using water and Alka-Seltzer tablets. The winner is determined by whose launcher goes the highest in the air and the creativity of the design. On top of a $30,000 prize, the winner will also be featured in the Guinness World Records.
The team consists of four Engineering students from the Math and Physics Club: Mustapha Baltaji, Jayson Fitzpatrick, Joseph Coma and Kevin Bak. The team has been working on this project since February. They have worked on it during weekends and breaks to stay on top of the project. Professors Mike McCoy and Randy Schwartz advise the Math and Physics Club and they provided the club’s meeting space to the team.
“After nights of hard work and experimenting and building the projectile all over again, we were able to achieve what we are looking for.” said team leader and Marine Engineering major Mustapha Baltaji.
The Bayer is a pharmaceutical company and they sponsor the competition under its Making Science Make Sense program. Their goal with the program is to attract more young people into STEM projects.
Bayer required each team to form a video on their process. Baltaji approached Schoolcraft’s Media Department to record the video. Atticus Laird, a student employee at the Media Department was assigned to record and edit the video. Once the video was edited, the team had to get more likes on Facebook than the top six other competitors.
The project was funded by the Student Activities Office. Director of Student Activities, Todd Stowell worked directly with Baltaji on getting everything they needed and utilizing resources on campus. The team took advantage of Schoolcraft’s Stratasys F270 3-D printer in the CAD Lab, thanks to Professor Steven Rocho, to craft the five rockets. They made over a dozen versions of the projectile, all of which were successful. Fitzpatrick stayed on top of the Rocket Design. Choma led the team in the chemistry area. Professor Michael Waldyke allowed Choma and the rest of the team to use the chemistry lab for the project. Choma discovered a way to reduce carbon dioxide gas from dissolving in the water of the rocket before launch. This overall increased the success rate of the launch.
Bak led the way in the design of the launcher. The launcher is made of high-grade PVC pipe wrapped in carbon fiber. The team is also working with the welding department on creating a launch stand for the upcoming competition.
“What they’re doing is truly inspirational,” said Physics professor Christopher Wood, who provided access to the team to the physics lab for simulations. “If I didn’t know otherwise, I’d guess they are senior level students at a prestigious 4-year engineering school.”
If the students win, they will split the prize between the four of them.
Nonetheless, the fact that Schoolcraft’s Alka-Rocket team made it this far is impressive and should be applauded. The Alka-Rocket team would like to formally thank the following students for their support and assistance: Jacob Delis, Klea Hoxhallari, Anthony Marcum, Iris Do, Halle Mancuso and Steven Bak.
For more information on the Alka-Rocket team, call the Student Activities Office 734-462-4422.
Photo courtesy of Schoolcraft College