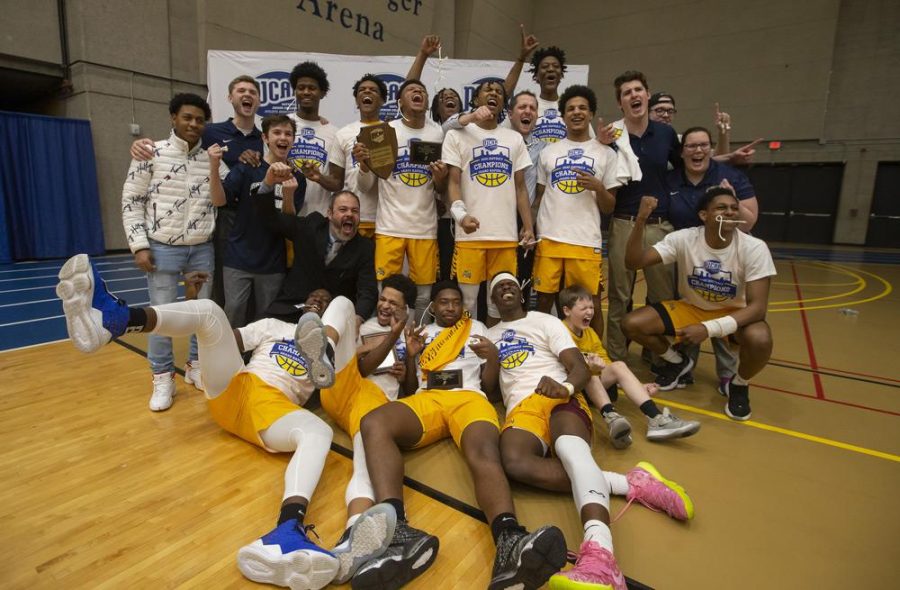 This year’s National Junior College Athletic Association (NJCAA) Great Lakes East District Champions title is now the property of the Schoolcraft College Men’s Basketball team.
After holding off a feisty seventh seeded Delta College team to win the title March 7, 71-66, the Ocelots punched their ticket to the NJCAA Division II National Tournament which was to happen March 17-21 in Danville, IL. This district win showcased the strong spirit of the Ocelots, even though their opportunity for the national title was taken from them due to the Coronavirus Pandemic and left the team with a lot of “What if.”
“It has been a little tough ending the season due to COVID-19 because we really felt we had a good chance to win it all,” said Head Coach Corey McKendry, “but we are focused on what our next opportunity is.”
This was set to be the Ocelots third appearance in the NJCAA Division II national tournament. Past appearances include 2015 and 2016 both which the team finished sixth.
The strong support from the college gave these spirited athletes their winning edge.
“No other team could match the depth we had because of how skilled everyone is,” said sophomore guard Tre Harvey on the team’s spirit. “Just knowing all the hard work […] we put in as a team finally paid off in the end.”
None of this would be possible without a good character-built team. This year’s Ocelots have been among the top assist teams in the country for the past several years now, with a strong defense to boot.
“Seeing our guys put their teammates’ success ahead of their own personal goals is very special and something that will help them in life long after the ball stops bouncing,” said McKendry. Working with his players at a critical juncture in their lives as they work to accomplish feats they never dreamed of before made coaching a true blessing for him.
On top of the win and outstanding season for the Ocelots, several players received postseason honors. Sophomore guard Tre Harvey (14.0 points per game) was named All-Region, All-MCCAA and
First Team All-Conference as well as freshman guard D’Quarion Cole (11.7 ppg and team-best 7.5 rebounds per game). Cole also received Eastern Conference All-Feshman team honors. Sophomore guard/forward Kemon Bassett was Second Team All-Conference with 10.9 ppg. Sophomore guard Carl Bow Jr. earned Third Team All-Conference honors after averaging 10.1 points per game.
Sophomore forward Bryce Hunt was named Defensive Player of the Year after blocking 3.4 shots a game. Sophomore guard David Wren also was in double figures at 10.1 ppg while sophomore guard/forward Zavon Godwin averaged 8.3 ppg.
In addition to his previous honors, Cole was named to the All-Freshman Team and McKendry won Coach of the Year for the Eastern Conference.
Opportunities ahead
The next opportunity is seeing his sophomores receive scholarships that will help them continue their education. McKendry wants to see all his men accomplish this goal: one that’s worth more to them than winning the championship.
“Every sophomore currently has an offer on the table to move on and go to school for free,” said Coach McKendry. “They just need to finish strong academically despite these unique circumstances to accomplish that.”
The success of Men’s Basketball shows that Schoolcraft is a phenomenal place for these young men to start their careers.
“Many will go on to play for a long time and for some their basketball career will end soon,” says McKendry. “But they will always look back on their time at Schoolcraft College as some of the best times of their lives and they will remain friends for a lifetime.”
The Ocelots ended the 2019-20 season with an overall record of 28-4, conference record of 14-2; home record of 13-0; road record of 11-3; neutral record of 4-1 and a points per game average of 85.8.
Photo courtesy of Schoolcraft College