A closer look at the Presidential candidates 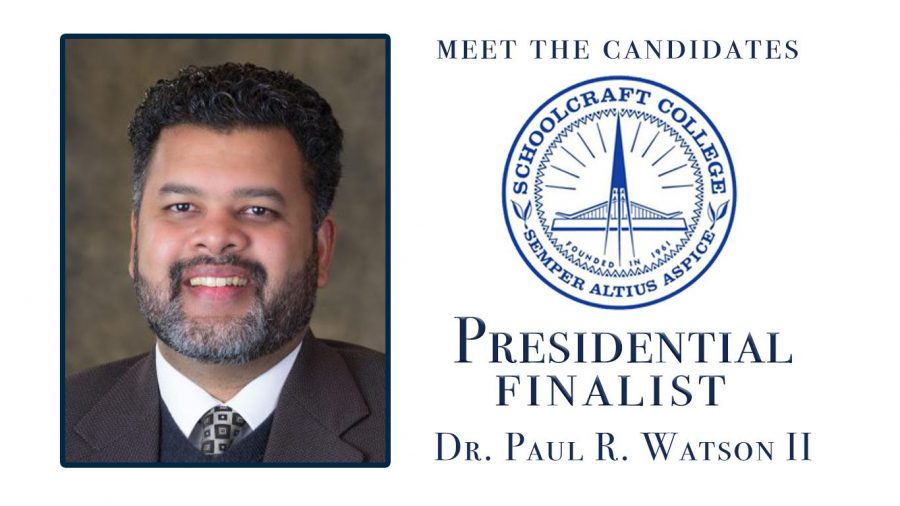 Dr. Paul R. Watson II is no stranger to higher education, amassing 15 years of experience in both administrative and teaching roles. Currently serving Kellogg Community College as the Vice President of Instruction, Dr. Watson now seeks a new challenge in the bid to be Schoolcraft College’s next President.
Dr. Watson is among the final three candidates looking to fill the role that Dr. Conway Jeffress has filled for the past four decades.
Education
Dr. Watson began his post-secondary education at Houghton College in New York. He would receive his Bachelor of Arts in Mathematics in the late ‘90s. From there, Dr. Watson went on to attend Syracuse University where he would obtain his Master of Science in Mathematics Education in 2000. In the same year, he continued his education at the University of Rochester. Here he would earn his Masters Degree in Teaching and Curriculum in 2006. Most recently in 2018, Dr. Watson Earned his Doctor of Education in Educational Leadership and Management from Drexel University located in Pennsylvania.
Work Experience
Dr. Paul Watson began his career in higher education in the same place he earned his first degree, Houghton College. Starting in 2000, he worked as the Assistant Professor of Mathematics Education. He would serve a little over six years in this position before making a career change.
In 2006, Dr. Watson made the switch from post-secondary education to secondary education where he would work as a Mathematics Teacher at Jefferson Central School in Jefferson, New York He taught high school math for five years before returning to the realm of higher education.
In 2011, he took on the role of Director of Mathematics at Pennsylvania College of Technology. At this institution, he would move through several administrative roles over the course of approximately eight years. In spring 2012, Dr. Watson became the Assistant Dean of Sciences, Humanities and Visual Communications. By July 2013 he moved up to Dean of Academic Services and College Transitions. The last role he would take on at this institution was as Dean of Academic Success, which he filled from Jan. 2018 until Dec. of that same year.
Most recently, Dr. Watson has been serving Kellogg Community College in Battle Creek, Michigan as Vice President of Instruction. Throughout his career in academia, Dr. Watson has created and supported teams and communities as sources of sustainable change. Supporting students with the behind the scenes leg work required to provide them with opportunities such as dual enrollment, pathways for transfer, continuing education courses and workforce development. Beyond that, he has a track record for connecting with students, faculty and staff.
Other Roles
Dr. Watson has a history of connecting with the community where he serves, building partnerships that benefit both the institution and its students. Holding a multitude of positions on local boards and committees, Watson’s achievements are difficult to condense. He presently serves as a Higher Learning Commission Peer Reviewer and serves on the Executive Board of the Council of Accreditation for Two-Year Colleges.
He’s previously been recognized at the state-level for his work on the chamber of commerce task forces and civic organizations. Watson is no stranger to advocating for change in legislation that would positively affect his community and students. One thing is for certain, Watson is a rising star on the stage of higher education.
For more information regarding Dr. Paul Watson II, please use the following link: schoolcraft.edu/presidential-search/dr-paul-r-watson-ii.
Your Voice Matters
All three candidates are scheduled to hold “Meet the Candidate” interviews open to community members, students, faculty and staff as a way to interact with and offer their comments on the college’s next president.
Each “Meet the Candidate” session will be via video conference on the Zoom platform with Dr. Watson’s scheduled to take place on Thursday, June 25, from 3:45 to 4:30 p.m. If you would like to attend you can dial in at 881 3306 1356 using the password “Watson” to join or use the provided link: us02web.zoom.us/j/86788353232?pwd=VFgvK3dUekN2eWhwWFdWMVU3RzNvUT09
The public also will have the opportunity to complete a survey regarding observations about the candidates’ strengths and concerns. The information will be compiled and submitted to the Board of Trustees for their review before choosing the next President. If you would like to submit comments, please use the following link: conta.cc/2AkiaJb.