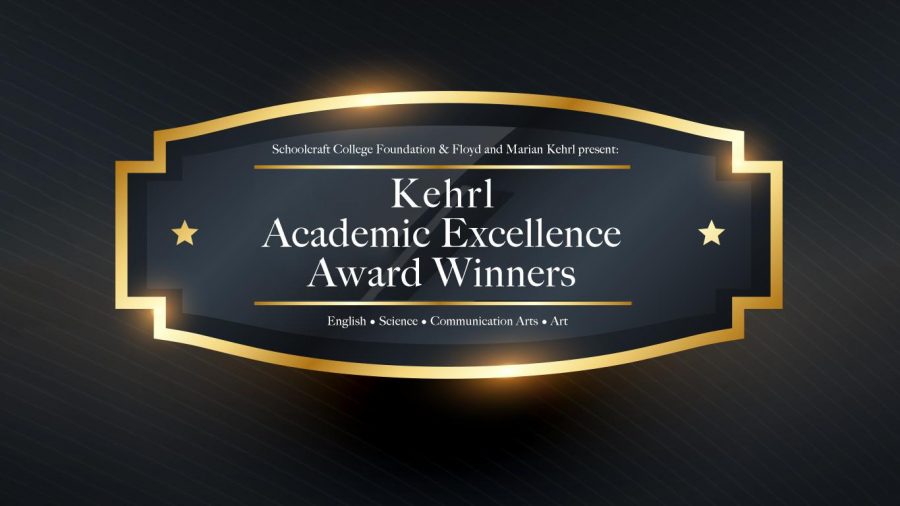 This year’s Kehrl winners for English, Science, Communication and Art have been selected and awarded their prize of $925, with the exception of the Pythagorean Prize winners receiving different amounts based on their placement in the competition. These awards are given out each year under the selection of faculty in each department and their own separate qualifying criteria.
The Kehrl Awards are funded and made possible through the generosity of The Schoolcraft College Foundation, which is supported by the award’s namesake, the Kehrl family. In response and out of respect for Floyd and Marian Kehrl’s support since 1964, Schoolcraft College created these awards and dedicated our beloved Kehrl auditorium to honor their continuous support. Many of Schoolcraft College’s prizes and scholarships are supported by the funds provided by the Kehrl family even today, serving as a rich piece of the college’s history and creating endless possibilities for students with many talents.
Kehrl Winners for English
This year’s Kehrl winners for English, under the selection of professor Anna Maheshwari, included the following students: Gabi Marian, Margarita Mucollari and Kiara Reese.
Marian and Reese are both pursuing a degree in Nursing while Mucollari is attending Schoolcraft College with an aim toward pursuing a Business degree.
Kehrl Winners for Science
For Science, the awarded students included Katherine Gonzalez, Klea Hoxhalllari and Patrick Long. In addition to their monetary prize, the winners were also given the Clarence C. Jones Excellence in Science award for their hard work.
Gonzalez is a chemical engineering major with intentions of working product improvement and reducing waste while creating new, friendly processes. Hoxhallari and Long are both biomedical engineer majors. However, Hoxhallari has dreams of attending medical school to become a neurosurgeon and Long wishes to transfer to the University of Michigan Dearborn to one day develop footwear or prosthetics. Students recognized in this category were chosen by chemistry professor, Dr. Paul Dickson.
Kehrl Winners for Communication Arts
Students awarded for their prowess in the Communication Arts by Dr. JuJuan Taylor include Aliyah Holt, Margaret McBride and Sophia Nikonowicz.
Holt hopes to become a nurse practitioner in the future and similarly, Nikonowicz is aiming to become a registered nurse once she transfers to Eastern Michigan University. Nikonowicz hopes to someday work at the Children’s Hospital of Detroit as a pediatric nurse. McBride, on the other hand, is a potential psychology major with the intent of transferring to Wayne State University to become an independent, pediatric occupational therapist.
Kehrl Winners for Art
Lastly, the students chosen for their talent in Art are Jessica Bradd, Samantha Watson and Hitomi Yaoita. These students were selected by professor Sarah Olsen and like other winners will be receiving $925 for their effort.
Bradd is a Computer Graphics Technology student and aims to create comic books and design characters for video games. Watson is a Fine Arts major who dreams of working in a gallery or marketplace where she can earn income by selling her creations and can also interact with like-minded artists. Yaoita is majoring in Computer Graphics Technology and hopes to work toward becoming a graphic designer while learning English as a second language at Schoolcraft College.
Congratulations to all who were recognized for their talents and thank you to the Schoolcraft College Foundation for creating these opportunities for students.
For more information on the Schoolcraft Foundation go to https://scf.schoolcraft.edu.