The new face of Schoolcraft 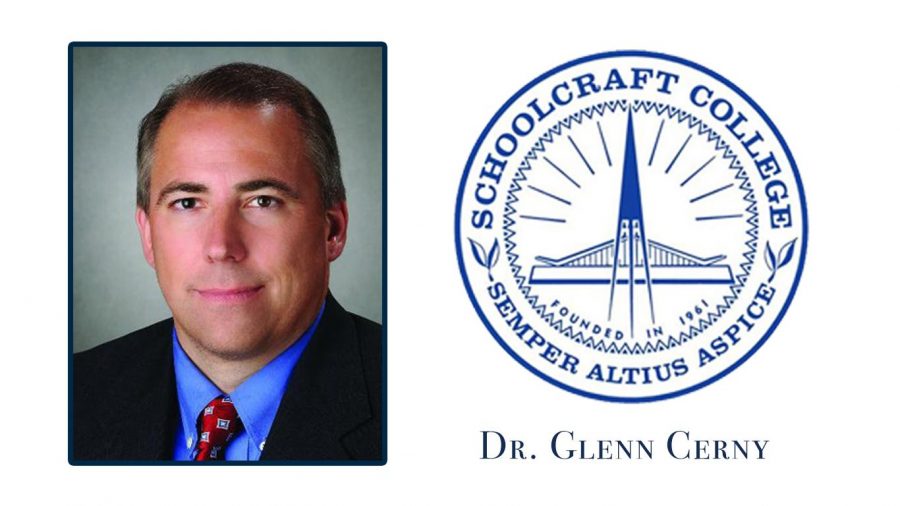 On July 1, Schoolcraft College’s Board of Trustees met to determine who would steer the institution in this new decade. By a unanimous vote, the Board determined Dr. Glenn Cerny would become the college’s next President. Cerny will have the month to transition into the new role and will officially begin his incumbency Aug. 1.
“We are excited to welcome Dr. Cerny as our next President of Schoolcraft College,” said Brian D. Broderick, Chair of Schoolcraft College’s Board of Trustees and leader of the presidential search committee. “Our rigorous and in-depth screening and interview process, which included valued input from Schoolcraft College faculty, staff, students, the Schoolcraft College Foundation board and the wider community, informed our decision. All of our finalists were of the highest quality, and in the end, we feel Dr. Cerny is the right choice to lead Schoolcraft College into the next era.”
Dr. Cerny has spent nearly his entire career in post-secondary institutions, with the majority of his time spent in various institutions throughout the state, such as the University of Michigan and Lansing Community College. Most recently, Cerny has served Schoolcraft College as the Vice President and Chief Financial Officer, a position he has held for the last decade.
In his tenure, he has aided the college in achieving financial stability and expansion alongside Dr. Conway Jeffress, who he will now succeed in the role of President. Dr. Cerny will be the Schoolcraft’s fifth President. Coming before him in their respective order was Dr. Eric J. Bradner (1961-71), Dr. C. Nelson Grote (1971-1981), Dr. Richard W. McDowell (1981-2001) and Dr. Conway A. Jeffress (2001-2020).
Opportunities to get to know Schoolcraft College’s new president are forthcoming as Schoolcraft prepares its return to campus.