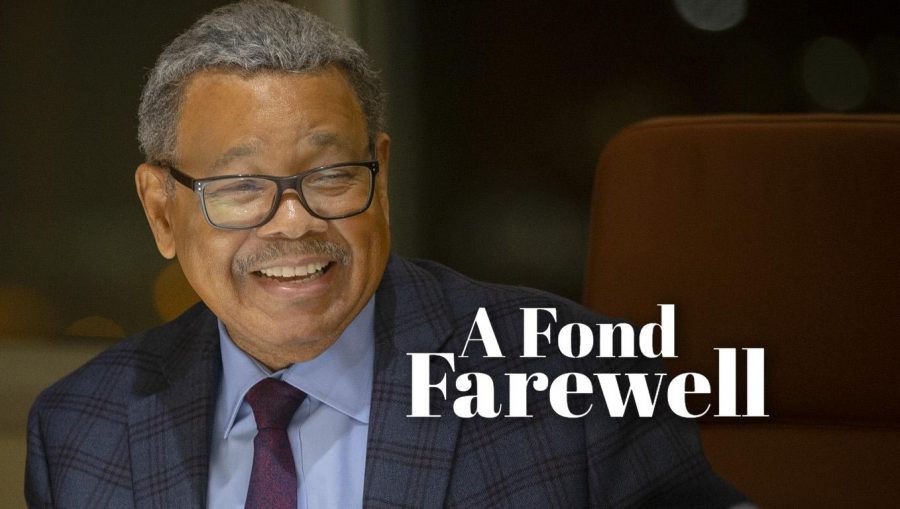 Dr. Conway A. Jeffress is soon leaving Schoolcraft’s presidential office and ending his professional career for a new chapter of life: retirement.
While Jeffress has held this position for the better part of the last two decades, he was still employed at Schoolcraft for a number of years before climbing the professional ladder. In honor and appreciation for his time at Schoolcraft, the Connection has decided to write him a farewell letter to recognize and thank him for his years of faithful service to our college and support of the Schoolcraft Connection.
Entering the role of President in July 2001, Dr. Jeffress has served the college in the top slot for the better part of 19 years. In his tenure, he oversaw the expansion and completion of several buildings including the VisTaTech Center (2003), Bradner Library (2005), the Biomedical Technology Center (2008), and the Jeffress Center (2014).
Dr. Jeffress also built partnerships with the Hawks & Wolves soccer group and St. Joe’s Health. These partnerships resulted in the construction of the St. Joe’s Sports Dome (2016) and the St. Joe’s Urgent Care Center (2017). These expansions have allowed Schoolcraft to serve their students by providing diverse learning environments around Schoolcraft’s main campus.
Aside from his presidential persona, Dr. Jeffress was cherished among students, staff and faculty alike due to his personable nature. In fact, he would often mingle among all of us in the Jeffress Center and could always be counted on to make a debut at college gatherings both on and off the campus.
Among his best qualities, Dr. Jeffress’ uniquely quiet and subtle humor could bring any company to stitches, whether it was a large college meeting or simply an anxious, rookie editor interviewing him for the first time.
No matter who he was with or what the situation entailed, Dr. Jeffress made it a point to make everyone feel at ease and welcome in his presence. It’s his philosophy that built the present home of the Ocelots and that continues to make it a place where all are welcome.
Even when knowing that he will be leaving soon, Dr. Jeffress still takes the time to do more amazing work at Schoolcraft. Showing that he doesn’t care about the job for the sake of the title, rather for the amount of good work he can do. Only recently has Dr. Jeffress indulged in the comforts of t-shirts and jeans, the equivalent of letting his hair down. We hope that the luxury of simplicity continues through retirement.
Success can be calculated in many different ways. One person may have a wildly contrasting definition to another. Some value a strong sense of determination, others choose an unbreaking faith in their beliefs and some need seamless communication to prosper. A good leader tends to possess all of these traits and more. Dr. Jeffress is a great leader. A successful career spanning several decade proves as much. It’s easy to take things such as walking into a building every day for granted, but these testaments to Schoolcraft’s success are all thanks to Dr. Jeffress.
As this chapter closes for not just the man, but the college itself, the Connection wishes him nothing less than the best for his retirement. After years of serving the staff, students and professors, it is more than deserved. His mark on Schoolcraft will reverberate throughout the college’s halls for years to come.
Best regards,
The Schoolcraft Connection Editor Team