End of an era

President Dr. Conway A. Jeffress leaves a legacy to remember 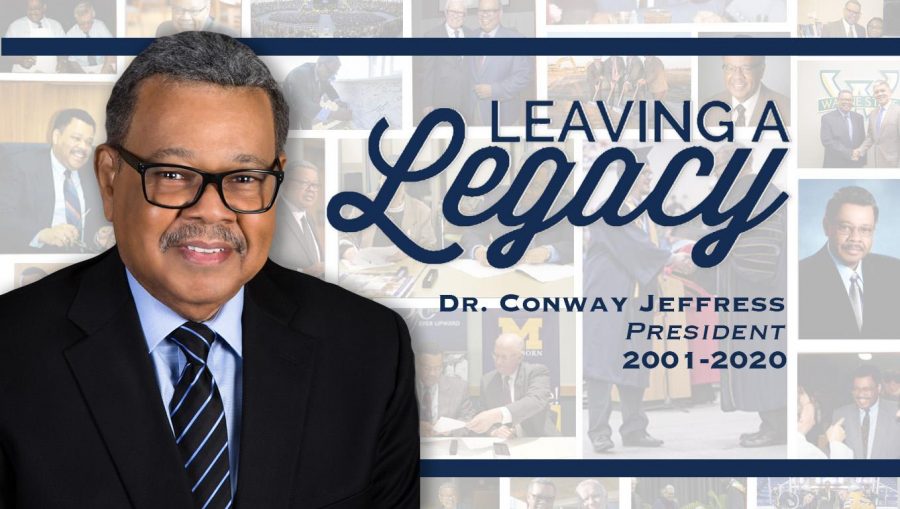 As the end of July approaches, the curtain is closing for Schoolcraft College’s fourth President, Dr. Conway A. Jeffress. With 19 years of service as president and close to four decades with the college, much has changed since Dr. Jeffress first came to Schoolcraft.
The time he has spent with the college resulted in many expansions and plenty of recognition and accomplishments. Arguably his most prominent impact at Schoolcraft came in the form of personal connections he built with students and the community, both of which are immeasurable.
Before serving as President of Schoolcraft College, Dr. Jeffress was the college’s Vice President of Instruction and Student Services. He assumed the role in 1982 after working as the Vice President of Strategic Planning at the Community College of Allegheny County in Pittsburgh. Dr. Jeffress officially undertook the position of President in July 2001, proceeding Dr. Richard W. McDowell in the critical role.
Building a legacy
Within the early years of his presidency, Dr. Jeffress oversaw three main campus upgrades and expansions. The construction of the VisTaTech Center occurred in 2003, Bradner Library was rebuilt in 2005 and the Biomedical Technology Center was opened in 2008. These buildings would be the start of his legacy of developing the school and expanding its operations.
The college would see further expansions in the mid-2010s, including a building named in honor of Dr. Jeffress. In 2014, Schoolcraft’s main campus opened up with the addition of the Jeffress Center, a name decided upon by the Schoolcraft College Board of Trustees.
Two more expansions would come via partnerships with the Hawks & Wolves Soccer teams and St. Joe’s Health. The construction of the St. Joe’s Sports Dome (2016) and the St. Joe’s Urgent Care Center (2017) expanded our sports and health services options. These two buildings were the start of a growing partnership.
It is important to mention the trials and tribulations the college had undergone trying to get the Headley Millage passed in 2018. While Schoolcraft’s programs, enrollment and graduation rates had expanded and increased under Dr. Jeffress’ watch, money coming in from the millage did not. With the passing of the amendment and the production of other alternative revenue streams, the college gained an extra level of financial stability that was not there when Dr. Jeffress initially entered the college. Schoolcraft’s luck was turning up, and more expansions were coming.
The business partnerships built under Dr. Jeffress still continues and now takes the form of new buildings on the main campus. While Dr. Jeffress may not oversee the completion, these buildings are already in the works.
The St. Joe’s Mercy Elite Sports Center is expected to be completed by this fall. IHA & St. Joe’s Livonia Medical Center is estimated to be completed by the spring of 2021. Schoolcraft College Manufacturing and Engineering Center located off Merriman Road is on par to be finished by the end of this summer and the Health Sciences Center should finish the full renovation by winter 2022. Updates on these buildings can be found at schoolcraft.edu/construction.
These upgrades directly benefit the students as they allow for the expansion of pre-existing programs as well as room for the creation of new ones. Jeffress’ impact on students, faculty and staff cannot be measured by graduation and enrollment rates alone. He has had a far-reaching impact on individuals both directly and indirectly, and his legacy will continue on even as the college enters a new era.
More than a title
In assuming the role of President, Dr. Jeffress also became Schoolcraft’s representative for the Michigan Community College Association (MCCA). As an active leader in the MCCA and Co-Chair of the Presidents Taskforce on State Appropriations, Dr. Jeffress has represented community colleges before various subcommittees exploring equality issues, fiscal responsibility and budget considerations.
He also served in the following roles and committees on the MCCA: Executive Committee member, Presidents Committee member, Legislative Committee member, Performance Metrics Committee member, Distance Education Committee member, Presidents Committee on Community College Baccalaureate member, Spokesperson to legislators for community college budgets and other legislative issues.
His service went beyond the boundaries of Schoolcraft’s campuses. From 2007 until 2015, he worked as the Commissioner in the Midwestern Higher Education Compact (MHEC), representing the State of Michigan. During his eight years with the MHEC, Dr. Jeffress served on the 2010-2011 Midwest CREST Steering Committee, 2012 Strategic Planning Committee, 2013 Standing Committee to Review the State Compact Commitment, 2013-14 MHEC Executive Committee, 2015 Awards Committee, 2015 Nominating Committee, and the Policy Research Advisory Committee where he served as Chair.
From 2017 to 2019, Dr. Jeffress worked as the Commissioner for the 21st century Education Commission. During the two years he spent with the commission, he worked with the Structure and Governance Committee. Both Commissioner positions were Governor-appointed, serving not only Schoolcraft but also our state.
Dr. Jeffress served as a member of several other boards throughout his time as President including the following: Board of Director, Metropolitan Affairs Coalition (MAC), member of the Walsh College Presidential Advisory Board , member of the Livonia Rotary Club, member of SEMCOG Talent Taskforce, member of Michigan Campus Compact, past member of the State of Michigan Funding Formula Taskforce, past board member of Garden City Hospital, and past member of Franklin University Council of Presidents
His most recent individual recognition came in February of this year. Dr. Jeffress was awarded the Livonia Legacy Award at the Livonia Chamber of Commerce’s annual Leadership and Awards Celebration. For more information regarding the award, visit schoolcraftconnection.com.
End of an era
Without a doubt, Dr. Jeffress impacted Schoolcraft and the surrounding community by being engaged and always looking forward. His vision, guidance and leadership allowed the college to continuously develop and stay up with the current demands of education and the workforce. Dr. Jeffress was a staunch supporter of the Connection, Phi Theta Kappa and other student groups, his presence will be missed but not forgotten.
The editorial team remembers Jeffress and thanks him for his service in the following article. To read it, click here https://schoolcraftconnection.com/2020/07/23/au-revoir-dr-conway-a-jeffress/
Feature images courtesy of the Schoolcraft College and Schoolcraft Connection