Eloise Asylum and The Scream Machine provide chills and thrills 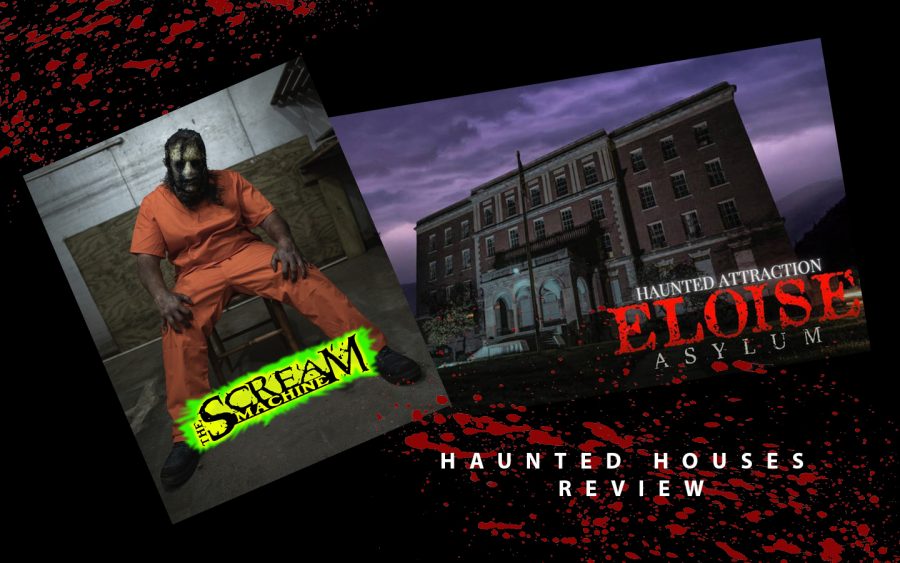 Metro-Detroit has always been a hot spot for haunts, and this year the competition has become even more thrilling, with the opening of the much-publicized Eloise Asylum at the beginning of Oct. To help fans of Halloween plan their spooky adventures, The Connection’s Matthew Kern and Alex Hawthorne visited both the newly opened Eloise Asylum, and The Scream Machine, a classic Metro-Detroit haunt and each provide their take on the value behind the scares. Here’s their personal account on both haunted houses.

Box office hours are Friday and Saturday 6:30 to 10:45. Sunday’s 6:30- 9:30. Haunt remains open past ticket office hours but you must be in line before ticket windows close to go through attractions.

Matthew Kern (MK): Approaching Eloise was daunting. The haunt is built inside the historic Kay-Beard building, formerly a working asylum, which has lain dormant since 1986. A group of protestors standing out-front added an additional degree of severity to the already chilling sight of the Asylum’s looming stone walls, brutal and absolute. They believe that the real-life horrors which occurred behind those walls transcend entertainment. They disagreed with the attraction’s depictions of mentally-ill persons as a source of horror, and felt its use of this location was particularly distasteful. A conscious consumer might take heed of their message. It is true that there are less-problematic haunts in the area.

Despite the value-check at the door, Eloise itself is a marvel of performance art. The mise en scene of each room is truly award-worthy; somehow viscerally terrifying, and yet eerily familiar, like stepping onto the set of your favorite horror film. Even without the performance aspects of the haunt’s dedicated actors and crew, it was truly incredible to see the level of attention to detail that went into assembling this experience. One might notice how well-designed the set is while squinting at a corpse, trying to determine whether it’s going to get up and move. Another immersive detail was the haze of smoke, growing thicker as attendees traversed deeper inside. This, as well as some very playful tricks of lighting (or lack thereof), led the experience to become more twisting and surreal. Eloise plays with the senses, so that visitors fear what might be there as much as what is.

Alex Hawthorne (AH): It was a misty and cool Saturday night. The sky was black as pitch, the fog was dense as smoke, and the air was as brisk as winter. To put it simply, it was a good time for a haunted house. From a distance Eloise looked like an eerie relic of the past that has been long abandoned, but the caravan of vehicles coming in and out of the establishment along with the protesters railing against the haunt’s exploitation of previous atrocities committed here; This was the place.

The spooks were scary and the scares were plenty. The theme of the whole place was based around a combination of supernatural, slasher and psychological horror, making for a major homage to the genre overall. The props and designs were captivating as well. It was entrancing just how much effort the actors and crew put into the set, with so many intricate details splattered around the large map of Eloise, creating a truly immersive experience. The only downside to this haunt had to be that the acting was very static, causing certain scares to feel overdone, and the crowds involved due to the linearity made it feel less scary.

Though all in all, anyone who would go through this at least once would definitely want to come back. Hopefully next year there are bigger and better things on the horizon, in both scope and ideas.

Actors at Eloise can touch, but actors in the Scream Machine could not, so it follows that they would have to try to do more with less. And they do. The actors provided such animated and engaging performances, they even pulled off a couple stunts. The staff working at the Scream Machine obviously enjoy their craft, which translates heavily into their performance.

AH: Though Eloise was an amazing experience, there felt to be a certain element missing. Luckily enough, The Scream Machine was just the place to get my heart racing.

At first Scream Machine seemed to be your run of the mill, cheaply seasonal haunted house. From the location in a strip mall and the short line at the door, nothing seemed to pop out; though those thoughts quickly changed after walking through the doors. Loud screams from guests quickly filled our ears as the place oozed with fear.

Most of the horror here, unlike Eloise, is based around the characters and environment. While Eloise had a lot more to work with, in terms of budget and design, Scream Machine makes due with their sets and acting to provide a worthwhile experience. The environment creates a feeling of claustrophobia and entrapment that Eloise doesn’t, and the actors use the space around them to give draw dropping performances.

This place leave you wanting more. As massive as the venue is, the haunt sure was small. Though the memories are everlasting. While both have their pros and cons, there is no better way to spend Halloween than to visit at least one of these haunts!