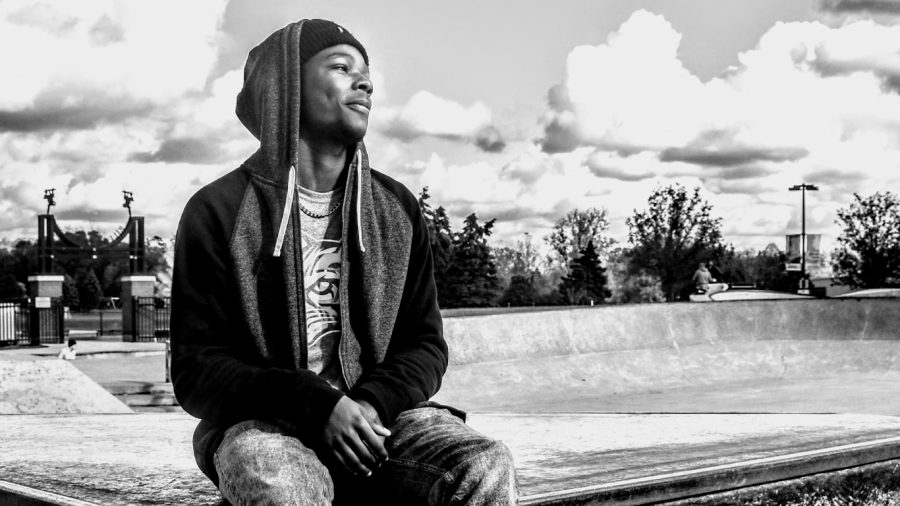 Ethan Prater (Epraylove) hopes to fulfill his dreams of being a top-selling musical artist and bringing a positive image to the music industry.

For many, music is a fun distraction. Maybe on a long car trip or during a run to kill some time, but for Ethan Prater, music is life.

As an 18-year-old student at Schoolcraft, Prater is majoring in sound recording to learn new techniques and music appreciation. Outside of Schoolcraft, the aspiring artist has big plans for the future, and accomplishing any less is not an option for him.

Prater started his official musical journey in 2019, when he created his alias; epraylove, but his passion stems much earlier.

He started writing songs and creating beats on GarageBand in 2019 with the help of his cousin, Austin White, also known by his music name ReidRZL, who produces some of his music. The two work closely together, ensuring that the music being created is something to be proud of.

“I had a realization like, wow, I can make wonderful music that can have an impact, but I had no proof to show,” said Prater. “I had no songs out, so it was really just a dream at that point. I pushed it for a year and in winter 2020 I dropped the EP (“Make it Come to Life”) with six songs.”

Prater soon began to start dropping singles every few months, experimenting with his style and emotions. As a result of this evolution of his music, Prater chose to remove the EP. He still respects the work it took to create such a project, but grew out of that style.

With enough practice, his next EP titled “Something Greater” dropped in 2021. With this and several singles released, Prater finally entered the scene with the goal of his songs being a force for good.

As a result, his music takes a unique approach and avoids more mature references that other artists may use. This EP delivers a hopeful message with songs such as “You Stay, I’ll Change” which explores themes of love, and the title track “Something Greater” which covers fame and legacy.

For every great artist, there is an even greater support system. White is far from the only member of Prater’s team as well, and they don’t plan on quitting anytime soon. With such passionate goals, Prater knows he needs an equally passionate team.

“The future is the wave, the vibes and positivity, and we- not me, but me and my team, we’re going to take off with this music stuff.”

Andrew Rice produces under the name Ay3ar3 for Prater, but they have also become good friends through their shared vision.

Matthias Heinrich is another friend of Prater. He is going to school for business and has recently joined the team. His knowledge of business means that when it comes to promotion, advertisement and merchandise, they can rely on him to know the numbers.

With his team covering the details, Prater can focus on his love of music.

“I basically go through life for months at a time, then I’ll just sit down and write a song about whatever has happened in the last couple of months,” said Prater. “How I am feeling mentally, and I just feel the beat first or whatever it be, and then just kind of pour out what I’m feeling at that time onto that beat. I’m trying to mix those emotions.”

The values that Prater holds are just as important to his music as they are to him.

As a Christian, he inserts his faith into his message. From sad heartbreak songs, to happy feel good ones, Prater wants people to know how he’s feeling by uniting them. He wants his listeners to feel seen and be able to relate to his own struggles. This intent is broadcasted through every song he has written.

As a musician, Prater listens to music just as much as he writes it. He has many inspirations such as Juice WRLD, Lil Peep, Blink 182 and Linkin Park. Beyond that, it’s the fame that drives Prater toward success.

“I’m trying to create a fan base here of people who are just here for the vibes, here for a good purpose and here because they want to be together,” Prater explained. “Just hop on a wave and my music would be the rally point for that.”

The artist has a lot to offer for those willing to listen and is in the process of remastering some of his old content to better reflect his current standards.

As someone who has seen Prater grow throughout his whole journey, White has much to say about their success.

“In the past year we’ve had exponential growth,” he said. “I didn’t even think I could get past 10 songs without running out of ideas then quitting. It took a lot of faith to just try new ideas and listen to what your spirit is saying to you and that’s how I started cranking out songs. It was my therapy to be honest. I would go to the studio and record what’s on my mind.”

Their hopes for fame don’t stem from narcissism, however. Instead, Prater wants to help the youth.

“You see people walk around here every day [and] I wonder what that person’s going through, but music can help them and if you can feel like you relate to me through one of my songs, then we’re friends.”

Prater has no plans to quit making music. He aims to continue making music that his followers can enjoy.

In the meantime, his listeners can find his music on all social media including Spotify, SoundCloud, Apple Music, Amazon Music, Facebook and Twitter under the name epraylove.