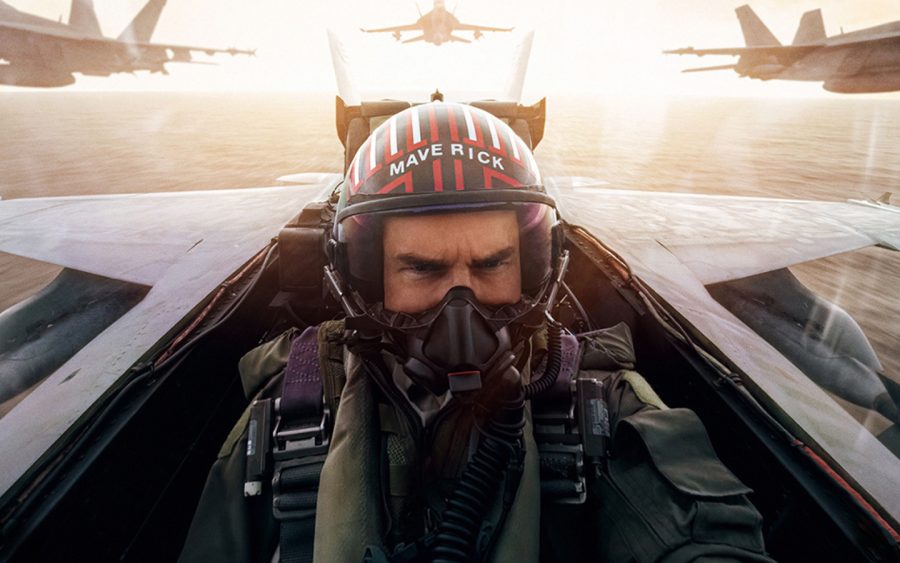 Action/Adventure
2h 17m
Rating: 10/10
In the age of reboots and sequels to old, classic intellectual properties, we are in the time of nostalgia and “member-berries” where sometimes the audience has not asked for a continuation of the stories that are remembered fondly. Top Gun: Maverick seems to fall into this category at first glance, but takes off to stand out of the norm in a way that excites the audience. Simply put, Top Gun: Maverick is made differently and not your traditional sequel.

Maverick (Tom Cruise) returns, as the name implies, this time as a flight instructor to teach an elite team of Top Gun graduates how to accomplish a harrowing mission against all odds. Notable performances include Bradley ‘Rooster’ Bradshaw (Miles Teller) as the son of Maverick’s old partner Goose, who wants to prove his worth as a pilot; Natasha ‘Phoenix’ Trace (Monica Barbaro) as an eager, by-the-books, ready for experience pilot; and Jake ‘Hangman’ Seresin (Glen Powell) as a cocky, rule-breaking hotshot who serves as a minor antagonist.

This movie was perfectly cast, everyone plays their role well.

Each character’s presence in the movie is done perfectly. Even the supporting cast and their presence in the story is incredible, they all are different from each other without focusing on them instead of the main cast, which is hard to do with so many likable characters. There are new characters besides the new Top Gun team that the movie introduces and the dynamic between them and the main cast feels like they’ve been around forever.

The movie also doesn’t forget that this is a “Maverick Movie” first and foremost. This is Cruise’s story. It’s a great reminder that Cruise is a great actor. He’s not just an action movie crazy stunt star based on his role in “Mission Impossible.” That being said,  the stunts he does in this movie are very impressive as well.

All of the action-packed tricks and stunts that the jets perform throughout the movie work and are contextualized in a way that is easy to understand by the viewer. The sequencing of shots in terms of cinematography and the fast paced action are all done aesthetically well to please the audience. It feels like how a “Top Gun” movie should feel in 2022, with well edited, beautifully composed action sequences and a sound track that compliments the story with every scene. This is a vast improvement on the technical marvel of its predecessor from 1986.

The soundtrack is full of 80s nostalgia. This action movie isn’t “John Wick with planes;” it still has the heart and spirit of the predecessor but with the quick pace of our modern lives.

And like our modern lives, this movie is NON-STOP.

Towards the end of act two, the story slows down enough to feel it’s ready to wrap up, but ramps right up by act three, not only visually but also story and dialogue-wise as well. However, some of the exposition that they set up could have been improved by showing some of the set up to the movie’s tension and problems, instead of having the characters tell the audience.

There is a romance plot between the main characters, but they save it to where it works in the story and don’t cram it in with other characters where it may have fit, leaving it more open to interpretation.

The movie knows where it comes from, but it doesn’t retread story plots even when there are opportunities towards it, the plot is different but still has nods to the original. Little nods that the audience expects from a “Top Gun” movie but it still feels modern and fresh.

The film works as a “Top Gun” sequel, but works as a good action movie and motion picture masterpiece as well.

This movie blends the storylines together well. However, if Paramount were to make another sequel and make this a new franchise to stretch thin, if this new cast would continue it, it would be worthwhile to see that dynamic.

It’s recommended that viewers watch the original “Top Gun” first to make for an easier transition into the storyline of “Top Gun: Maverick” With the basic plot knowledge of the first “Top Gun,” this movie will keep you at the edge of your seats.

Go and watch it on the biggest screen possible and prepare for a great movie that won’t disappoint.