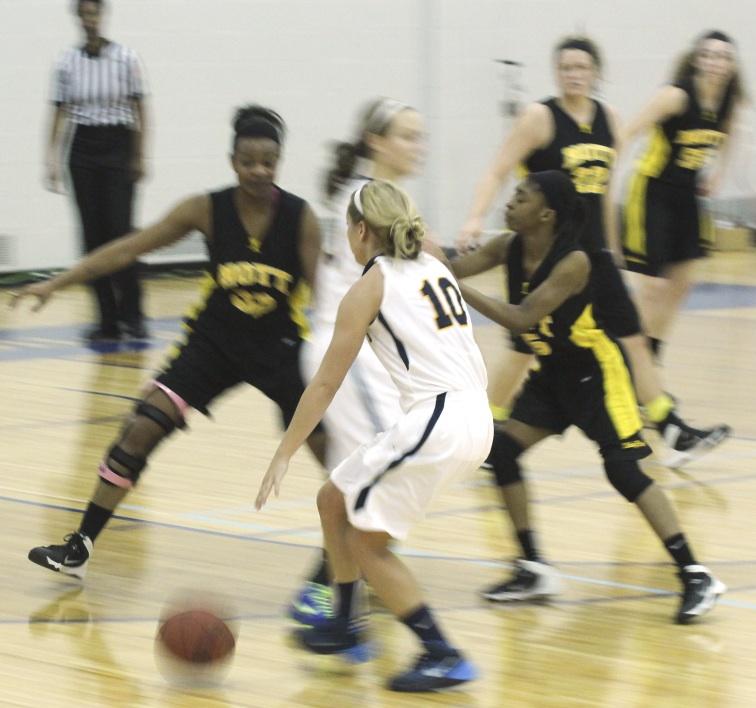 Gammons hits four late threes to help defeat Mott
By Evan Paputa
Sports Editor
During a timeout in the second half of Schoolcraft’s 70-63 overtime win against Mott Community College on Jan 22, the Ocelots had a ‘Hoosiers’ moment.
The timeout was called by Mott following a three-pointer by Schoolcraft’s Sara Gammons with 3:17 remaining in the second half, the Bears leading 53-49.
Gammons had a feeling that she was entering a zone, so she asked head coach Kara Kinzer if she could find out.
“Coach [Kinzer] was drawing up an out-of-bounds play to run and I said ‘Coach, can I keep shooting? I think I might be hot.’ And she said yes,” said Gammons, who finished the game with 19 points.
“She hit one ‘three’ and asked me if she could shoot it again and I went like this with my shoulder [Kinzer shrugged her shoulder],” Kinzer said.
Kinzer added that Gammons was a good shooter and she wouldn’t tell her to stop shooting.
After two successful free throws by both teams, Gammons finally could find out if she was hot.
With ice in her veins, Gammons then hit three-pointers on back to back possessions in-between a Mott made layup. The second three tied the game at 57.

“I don’t know,” Gammons giggled, about her three-point barrage in the late stages of the game.
Mott had one opportunity to win the game left, but a missed layup at the end of regulation forced overtime.
A jumpshot and layup in the first minute of overtime seemed to have Mott in cruise control.
But Gammons, who played all 45 minutes of regulation and overtime, had a little bit of magic left. She nailed her fourth three of the night with 2:47 left in overtime that cut the Mott lead to one.
Alexis Smith (17 points) notched a three-pointer on the next Schoolcraft possession to put the Ocelots up by two.
Mott tied the game at 63 with a Jasmine Gilspie layup with 1:52 left.
Schoolcraft ended the game on a 7-0 run with Tabitha Mann (12 points) and Chelsea Wesley (eight points) layups and two Gammons and one Wesley free throw.
Slow Start
Mott grasped the advantage early on with a nine point halftime lead. The Bears held the largest lead of the game by either team when they led by 14 with 1:32 left in the first half.
“We started off a little slow. But when we started getting into it after the half, we played with all heart,” Kinzer said.
Chipping away at the Mott lead was made possible with channeled physical play. Smart choices in Schoolcraft’s diamond press forced turnovers that gave the Ocelots a chance to win according to Kinzer.
“I saw people getting on the floor that I’ve never seen get on the floor before. We started boxing out,” Kinzer said. “We started doing the little things that win games. I’m very proud.”
The Ocelots are currently in sixth place in the Eastern Conference with a record of 3-5, 7-11 overall as of January 25.