Could a hike in minimum wage help Michigan’s economy?
By Nick Rende
Online Media Specialist
Much hoopla was made last year regarding Michigan’s minimum wage, rising to prominent notoriety with rallies outside many fast food establishments not only in Michigan, but many other states. That sentiment is again gaining steam, as a committee formed by labor and civil rights groups plans to propose a ballot proposal to Michigan’s Secretary of State to raise the minimum wage, according to an article by MLive. This proposal, if approved, will be placed on the ballot for Michigan residents to vote on in November of this year. Michigan is one of 21 other states to have a minimum wage exceeding the $7.25 federal minimum wage at $7.40 an hour. The state with the highest minimum wage is Washington with a $9.32 minimum wage, according to the Bureau of Labor Statistics (BLS).
All of this came on the heels of President Obama’s State of the Union address, delivered on Jan. 28, where he mentioned the increasing income-gap in America. The President said in his speech: “Corporate profits and stock prices have rarely been higher, and those at the top have never done better. But average wages have barely budged. Inequality has deepened. Upward mobility has stalled…Our job is to reverse these trends.” 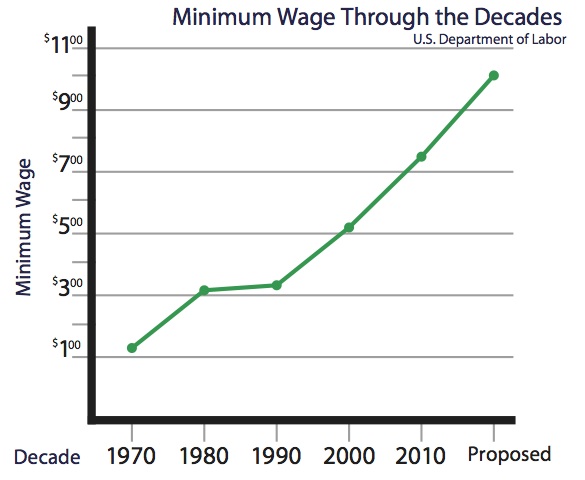 Many Democratic lawmakers in Congress have called for an increase to the $7.25 federal minimum wage. In Michigan, Democratic gubernatorial candidate Mark Schauer supports an incremental increase to the mitten’s minimum wage, adjusting for inflation. Schauer claims a higher minimum wage leads to economic growth, greater productivity, and increased demand. “When working families have more to spend on things like gas, groceries, and clothes for their kids, it creates demand,” he said. “And when demand increases, small businesses grow and hire more workers. Minimum wage workers have waited long enough for a raise,” Schauer said in a separate MLive article.
Most Republican opponents argue that a hike in minimum wage will do more harm than good, particularly to small businesses and shops that cannot afford to pay workers more.
“Economically, it’s a very harmful policy that hurts more people than it helps and particularly the poorest among the lowest income, because owners can’t just eat the cost of this increase in the mandated minimum, so they’re going to choose the most productive among their existing employees to keep,” said Michael LaFaive, fiscal policy director at the Mackinac Center for Public Policy, in the aforementioned article.
The effect that this will have on high school and college students is widely debated. Many who oppose an increase, as LaFaive stated above, contend that forcing businesses to pay more to minimum wage earners will put many of these workers out of work. This heavily applies to mom-and-pop shops, which barely scrape by in the state the economy is in. Opponents also claim minimum wage jobs should not count as careers, but rather unskilled labor, worthy of a smaller wage.
Many who support this increase contend that no such data exists to prove jobs will be lost as a result of an increase. They propose that a higher wage among employees will lead to a more motivated workforce, thus leading to better production and, as a result, will earn more money to spend on consumption.
While Michigan has a state-mandated minimum wage that is higher than the federal minimum, the unemployment rate is fourth highest in the nation, according to BLS. This shows that a tradeoff exists between wage and employment. The question Michigan legislatures need to ponder is which to choose.