The Fray’s new album release ignites talk
By Elizabeth Chapa
Staff Writer
On Feb 25, The Fray released their fourth album, “Helios.” Starting with their debut album back in 2005, “How To Save a Life,” the rock band from Denver, Co has made its mark with hit songs throughout the years. Songs like “Over My Head,” “How to Save a Life,” and “You Found Me” all out did the competition by making it into the top 10 of the Billboard Hot 100 chart. 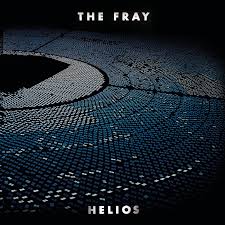 Following the release of “Scars & Stories” in 2012, fans have eagerly waited for the release to the Fray’s fourth album “Helios.” After it being pushed back from January, “Helios” was released February 25, and is now available on iTunes. In the months leading up to the album release, the band started off with the release of two singles off of the new album: “Love Don’t Die” and “Hurricane.” Lead singer, Isaac Slade, and guitarist, Joe King, who compose almost all of the band’s songs, combine to make the Fray’s sound so recognizable. Compared to their once piano-rock style, the new songs sound a lot more pop.
Going through both the singles, “Love Don’t Die” is a very upbeat and energetic. The song starts off with some guitar and leads into some dynamic instrumentals. “Hurricane” written in metaphoric terms about a girl, is not as upbeat as “Love Don’t Die.” They have the sound of a synthesizer giving it a more electric kind of sound, so that is very new for The Fray. “Hurricane” has a lot of resemblance to the song “Heartbeat” from the album “Scars & Stories,” which was one of their more popular songs from the album.
In an article by Gary Graff on Billboard News, he states, that the single “Love Don’t Die” being one of the band’s first ever collaboration with Coloradoan Ryan Tedder refreshes The Fray sonically, and with producer Stuart Price the band is being encouraged into its most aggressive outing yet. Most reviews on iTunes say that the songs are more pop and are anxious to hear what the rest of the album is like. The average review rates the album 4 stars. In an interview with VH1, Isaac Slade said, that the album was a step forward for them and a little more fun. The band is excited about the release of their new music; they agree that they are moving onto something new comparing it to their older music. If you are of The Fray, this is not the type of music you would expect to come from them. It seems as if they are trying to go away from their old music style into more mainstream.
The Fray was last seen on tour in 2012, although they do have a few concerts coming up. There has not been any news with the band going on tour, following with the release. Make sure you check out the band’s new album and decide what you think of The Fray’s new music.