Get ready for a freak show

Season four of “American Horror Story” premieres
By Savannah Platukas
Staff Writer
The fourth season of “American Horror Story” (AHS), produced by Ryan Murphy and Brad Falchuk, is set to air on Wednesday, Oct. 8 at 10 p.m. on FX. The anthology series reinvents itself every season with a new plot and new characters. Since the very first episode of season one, AHS has captivated viewers with its unique, controversial and horrific themes. Its expanding audience expects each season to outdo the last. 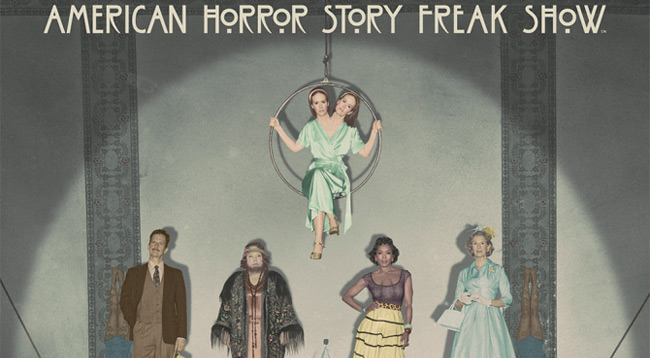 The first season, titled “AHS: Murder House,” debuted in October 2011 and was centered on the Harmon family. Ben Harmon, played by Dylan McDermott, his wife Vivien, played by Connie Britton, and their teenage daughter Violet, played by Taissa Farmiga, move to L.A. for a fresh start, but later discover their new home to be haunted by the ghosts of its previous residents. The deceased homeowners, the Langdons, starred Jessica Lange, Evan Peters and Jamie Brewer.
“AHS: Asylum,” was the name of the second season that was set in 1964 in the Briarcliff Mental Institution. The season focused on the patients, wardens and doctors who resided in Briarcliff. In charge of the asylum are Sister Jude, played by Lange, and Sister Mary Eunice, played by Lily Rabe. All patients, ranging from Peters role as a serial killer to Sarah Paulson’s role as a lesbian journalist, are under the treatments of Dr. Oliver Thredson and Dr. Arthur Arden. Plagued by insanity, the institution and those in it are often subjected to outrageous treatments and experiences.
The third season, titled “AHS: Coven,” was set in New Orleans and focused on a coven of witches. The young witches were students at the elusive Miss Robichaux’s Academy where headmistress Cordelia, played by Paulson, and her up-to-no-good mother Fiona Goode, played by Lange, took charge. The witches starred Taissa Farmiga, Emma Roberts, Gabourey Sidibe, Jamie Brewer and Lily Rabe. The five witches further discover both their powers and weaknesses throughout the season.
Season Four is titled “AHS: Freak Show” and takes place in Jupiter, Florida during 1952. This is when one of the last remaining freak shows in America is being run by Elsa Mars, played by Lange. The “freaks” include Paulson as conjoined twins, Kathy Bates as a bearded lady, John Carroll Lynch as Twisty the Clown and more. This season has already been proclaimed the scariest of them all.
Producer Ryan Murphy calls Twisty “the most terrifying clown of all time.”
Season three has been the most popular to date, with over 5.5 million viewers. However, the upcoming season is sparking lots of interest, especially with its amplified fright factor.
It will be interesting to see if “AHS: Freak Show” brings as many viewers and nightmares as people are anticipating.