Hungry for a win 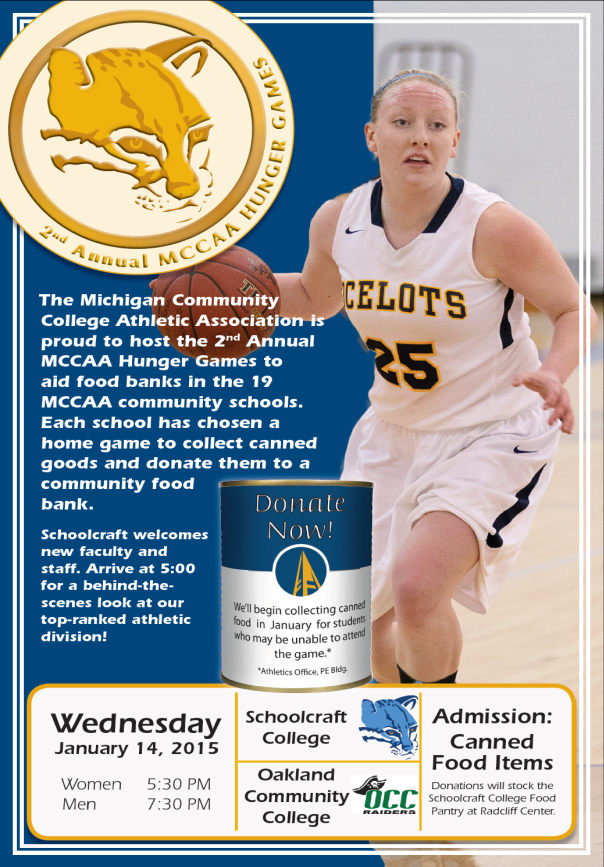 hools by charging canned food items as the price of admission. Each school in the conference chooses a home game to collect canned goods and donates them to a community food bank.
The womens team (12-4, 3-0 MCCAA) is currently riding a six game winning streak, with their most recent win coming in a 60-49 win over Alpena. The impressive play of freshman guard Ashley Bland (20 PPG), freshman guard T’era Nesbitt (14.9 PPG) and freshman forward Rikki Sherdt (12.1 REB/G) has catapulted the Ocelots to the top of the MCCAA Eastern Conference.
The mens team (13-3, 2-1 MCCAA) has been on a tear of late, winning six of their last seven behind freshman guard and leading scorer, Ronald Booth (18.7 PPG), and the return of sophomore forward, Javon Thomas. Despite holding the best overall record in the MCCAA, the mens loss to Macomb in open conference play put them one game behind Oakland and Macomb for the Eastern Conference lead.
Donations from Wednesday’s games will stock the Schoolcraft College Food Pantry at the Radcliff Center. For those who can’t attend, but wish to help the cause, the athletic department is currently collecting canned food items in the athletics office located in the Physical Education building.
In addition to the Hunger Games, the Schoolcraft Athletic Department will be giving a behind-the-scenes look at their top-ranked athletic division before the womens game.
Tip-off for the womens game is scheduled for 5:30 p.m., and the men will start at 7:30 p.m. The behind-the-scenes look of the Athletic Department begins at 5 p.m.