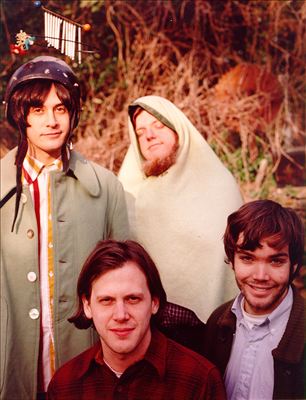 5 out of 5 Stars
“And one day we will die and our ashes will fly from the aeroplane over the sea…,”were the words bellowed out by Neutral Milk Hotel’s front man singer, songwriter and guitarist, Jeff Mangum, at their concert on April 23 at The State Theater in Kalamazoo.
If one has never listened to Neutral Milk Hotel before, they would immediately notice the overwhelming love and devotion Neutral Milk Hotel fans have toward the band. From the moment the reclusive Mangum struck the opening chords for “I Will Bury You In Time,” the crowd lit up with energy.
Neutral Milk Hotel released two albums in the 90s, “On Avery Island” and “In the Aeroplane Over The Sea,” after the release of Aeroplane, Mangum had a reported a ‘mental breakdown’ and broke up the band only to return 15 years later and begin touring again in 2013. Over those 15 years, the album “In The Aeroplane Over The Sea” became an indie classic that maintained sales of 30,000 records annually. The album hits deep and is based in simple chords with long held notes and hard hitting lyrics. There are many references to the Holocaust in the album, as Jeff talks of a girl being buried alive in 1945 and a two-headed boy floating in glass. The album is brilliant and deserves the sustained record sales, and the recognition it has on Rolling Stones Top 500 albums of all time. The reunion tour has been long awaited.
When the rest of the band joined Mangum on stage after “I Will Bury You In Time,” the crowd cheered, and the auditorium was filled with energy. The band has a pronounced stage presence together with Jeremy Barnes on drums, Julian Koster on bass, and the singing made up the rhythm section of the band. Scott Spillane plays trumpet, and the group compliments each other well.
When the band jumped right into the next song “Holland, 1945,” the show became a sing along. Every audience member appeared to know all the words to all the songs. It seemed that the band has gotten better over time because they now have live performance was electric. The bands tonal quality matched the exact sound of the album “In The Aeroplane,” and Mangum’s voice has certainly aged for a more mature sound. Mangum now has a more rich voice that easily leaves his fans in awe and hanging on every word that he sings.
If you are looking for a band with music that has a purpose, listen to Neutral Milk Hotel. Their music brings purpose through their lyrics, which touch deep on many issues individuals face daily.
The legendary band provided fans with an emotionally engaging performance where fans didn’t want to miss a beat. The concert allowed everyone to let go and leave feeling a new energy and possibly a new perspective on music.
Neutral Milk Hotel announced this will be their last tour. It is highly recommended to catch them live or to give their music a listen. It is easy to feel a connection with their life-changing music.