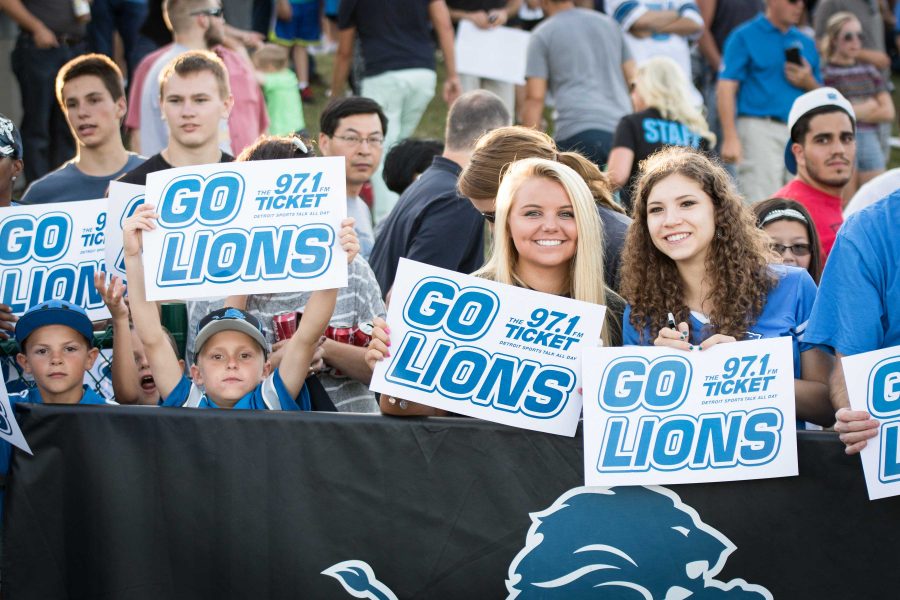 Thousands of faithful Detroit Lions fans flock to Novi High School to support the team during their first open practice.


As the 2015 football season kicked into full gear with the start of NFL training camps around the league, the Detroit Lions planned on sharing the experience with fans.
Just two days into full squad training camp, the team took to the field on Wednesday, August 5, performing their first padded practice at off-site Novi High School in front of approximately 7,200 fans. The team displayed fundamental drills needed on the field to gain victories and did not hold back from showing their fans the daily preparation that goes on behind the scenes.
When the season begins and road games arrive, second year, head coach Jim Caldwell expects his team to be prepared for road games by not only giving fans an opportunity to watch the Detroit Lions practice at a local facility, but also give the players a chance to step out of their comfort zone to practice on a different playing field.
The evening commenced with warm ups and a routine team stretching, and coach Caldwell broke down the agenda for the evening, “What you’ll see is a regular practice for us, it will vary from 1-on-1 drills, individual drills, we’ll have some team sections, 7-on-7 and our special teams work as well.”

Familiar faces on the field such as quarterback Matthew Stafford and wide receiver Calvin Johnson could be seen running similar drills fans would see in a game scenario.
Returning players coming off of an injury plagued 2014 season and who will be crucial playmakers this season are linebacker Stephen Tulloch and tight end Eric Ebron. Running back Golden Tate III commented about his teammates after the open practice, “We have no doubt that the guys we wanted to be on the field with us last year had a great off season. One that comes in mind is Waddle and Tulloch, we expect those guys to come back stronger than ever.”
Amongst the returning squad veterans were young, newly drafted faces that are trying to earn playing time. Drafted 54th overall in the 2015 draft, running back Ameer Abdullah looked sharp on the field during practice. Abdullah said on the Lion’s blog on the official team website, “I definitely feel like I took some people by surprise and some people took me by surprise.” Abdullah impressed many while he competes with returning starting running back Joique Bell for his position this season.
Bell who is currently on the injury report is hoping to return for the first regular season game on Sunday Sept. 13 against the San Diego Chargers. “I’m running around a little bit right now, and I feel good,” Bell said, “I just have to wait and figure out when my body tells me it’s ready to come back.”
The combination of linebackers Tahir Whitehead and DeAndre Levy joining forces with Tulloch create a robust defensive line. Levy agreed to a four year extension to his contract after the practice on Wednesday evening.
Although fans were anxious to get a first look at defensive tackle Haloti Ngata, he was still seen on the field helping his teammates with drills; however, he has been placed on the injury report list for his hamstring. Ngata will return during the Lion’s home opener against the San Diego Chargers on Sunday, Sept. 13.
Other key players that stood out included left tackle Riley Reiff, who dominated his reps during the individual 7-on-7 lineman session when he went up against defensive end Ezekiel Ansah twice, defeating him both times.

Special teams also shined in Novi, where returning place kicker Matthew Prater consistently booted the ball from the 50-yard line. Following behind Prater as second string, kicker Kyle Brindza had a few decent kicks through the uprights, but must work on his consistency for the upcoming season.
The 2015 Detroit Lions season looks to be optimistic based on the fans enthusiastic cheers from the sidelines. To feel out of the comfort zone for the players gives them a tremendous advantage, and also inspiring and giving players the feeling of when they were playing under the “Friday Night Lights,” bringing some significant memories from their high school careers.
The success of last year’s practice at Wayne State University in Detroit allowed the team to return for a second public practice in the Metro Detroit community. Novi High School not only allowed players a chance to demonstrate their skills, but it also allowed the team to expand their fan base across the Metro Detroit area. The practice concluded with the team breaking out towards the fans blocked off, but they shook hands with fans, signed autographs and took selfies.
Delete Image
Align Left
Align Center
Align Right
Align Left
Align Center
Delete Heading