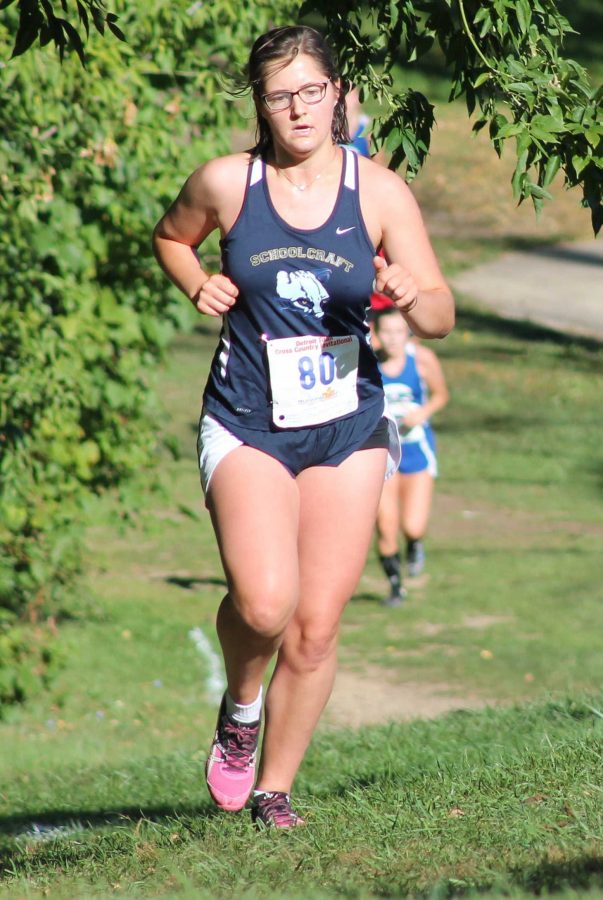 In the Titan Invitational, Grace Doolittle cut down her time by about two and a half minutes from the Golden Grizzly race the week prior.

Cross Country runs for the win
By Natalie Shirvanian
Sports Editor
Schoolcraft’s cross country team prepared themselves over the summer to compete for titles.
The Ocelots opened their season on Friday, Sept. 6 at the 15th annual Golden Grizzly Invitational at Oakland University. Entering his eighth season with the Ocelots, head coach, Ed Kozloff said, “The race allows an opportunity for coaches and old friends to get together to see what the coming season will bring.”
On race day, coach Kozloff also announced the women’s captain for the season will be sophomore, Audrey Baetz, who is competing for the All-American title this season. “I do work hard, and I do have the skills to lead the team,” Baetz said about leading the Ocelots.
As Baetz competes for a title, she also sets the pace and expectation for the team. The Ocelots race as individuals due to not having enough runners on the team. Baetz has become inspiration to her fellow teammates, guiding and motivating them to finish every race strong. Sophomore runner, Grace Doolittle sees the dedication Baetz shows, “She ran through the whole winter in blizzards.” Doolittle also added, “She brings a sense of determination and seriousness to the team.”
As the team laced on their shoes for their first race, they started the season with a strong run. Coach Kozloff knew that the race at Oakland University’s campus would allow the runners and coaches to determine what the season will bring. “The woman’s race at 4K (2.49 miles) was a kilometer shorter than the usual 5K (3.1 mile) racing distance and provides a good distance to start the racing season,” Kozloff regarding the Golden Grizzly Invitational.
Baetz finished the race two minutes faster than her start in the 2014 season, coming in at 18:48 (7:32 per mile) calculating to a 23:24 5K pace. Freshman, Lindsey Gallagher had tough week of training after a serious fall off of an all-terrain vehicle the previous weekend. According to Kozloff, however, Gallagher finished behind Baetz with a time of 19:03 (7:40 per mile) translating to a 23:49 5K pace. Doolittle was next in 20:58 (8:26 per mile) making it a 26:12 5K pace, well behind her performances of last year. Finishing for the team, was freshman Caitlin Goyer, who came in at 21:06 (8:29 per mile), a 26:23 5K pace.
The Ocelots held their own among the other collegiate runners.
Next up for the Ocelots, is the Titan Invitational at Cass-Benton Park in Northville which will be held Saturday, Sept. 12 at 11:45 a.m.
For more information, go to www.mccaa.org.