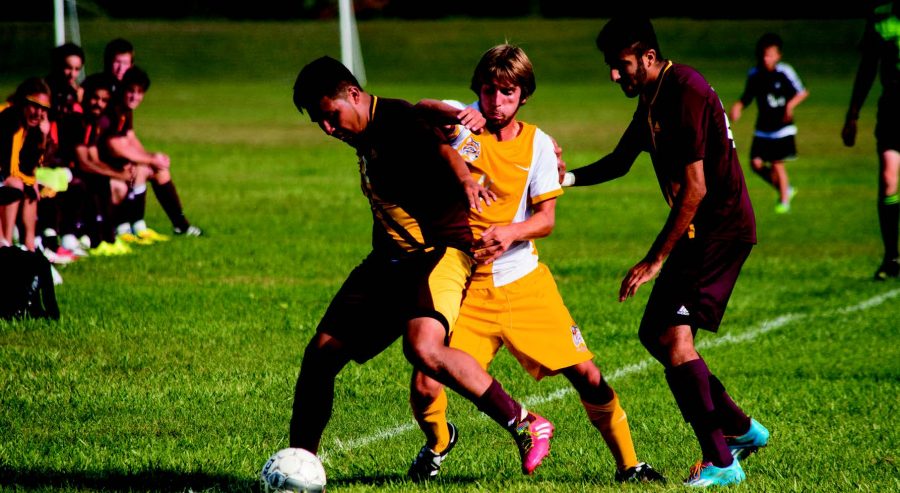 Men’s soccer suffers first loss of the season
BY JAMES PAXSON
STAFF WRITER
The Schoolcraft Men’s Soccer team experienced their first major setback of the season. The team suffered a heartbreaking 4-1 loss, against host Jackson Community College on Sept. 26., after a headstrong start..Despite the setback in the loss column, the Ocelots continue to hold onto the first place position in the Michigan Community College Athletic Association (MCCAA) with a overall record of 8-1-1 and are currently ranked seventh in the National Junior College Athletic Associations (NJCAA) Men’s Soccer Division 1 poll as of Sept. 30.
The match went scoreless for majority of the first half, as the Ocelots pressed to defend the Jets attack. Unfortunately, the Jets offensive attack broke through at 31:52 with a goal by Jackson’s Carlos Gabriel, assisted by Osman Haji, making it 1-0 Jets before the end of the first half.
As second half play resumed Schoolcraft’s defense began to fall apart. The team gave up two consecutive goals to Jackson. Jackson’s Omar Mohamed (51:24) and Dardiri Mussa (60:06) each scored making it 3-0.
Despite being down by three goals, the Ocelots continued to fight. Sophomore forward Victor Contreras broke the Jet’s shutout with his goal at the 76:11 mark making it 3-1. Freshman midfielder Jacob Rosen assisted on Contreras’s goal.
The Ocelots couldn’t shift into gear to regain momentum and found themselves out of reach of regaining control of the game. Jackson scored an extra insurance goal by Omar Mohamed at the 87:05 mark which sealed the loss for the Ocelots, 4-1.
With their first loss this season, Schoolcraft looked out of sync from the beginning of the clock; the communication was minimal, and the team looked defeated from the start.
“One thing we need to do better is scoring more goals and capitalizing on our opportunities. We have too many missed opportunities as a team,” said head coach Rick Larson.
Key freshmen step up
Prior to their heartbreaking loss, the Ocelots played Owens Community College at Owens on Sept. 23. Heading into this game with a four game winning streak, the Ocelots did not waste any time putting points on the board. Victor Contreras scored the first goal at the 4:29 mark, assisted by freshmen forward David Tetaj.
After his first goal, Contreras assisted freshmen forward Aidan Shennan at the 32:48 mark, making Schoolcraft’s lead 2-0. Just eight minutes later on the offensive attack, the Ocelots scored their third goal. As Rosen’s shot was blocked, freshman midfielder Conner Rutz took the goal off of a rebound making the lead 3-0 before halftime.
Contreras scored his second goal of the game, assisted by sophomore forward Costa Well, at the 71:40 mark. The final score was 4-0 shutout in favor of the Ocelots.
Staying consistent
Schoolcraft played host to Jackson on Sept. 20 and set the tone early with the Ocelots scoring two goals in the first 15 minutes. The first goal was scored by Jacob Rosen at the 2:05 mark, and the second by sophomore midfield Davide Di Poce, assisted by sophomore midfield Jon Quintana at the 13:03 mark. Schoolcraft tallied up two more goals on the board with Tetaj scoring at the 24:10 mark, and Quintana was assisted by Shennan at the 69:28 mark ending the game with a victory, Ocelots 4-2.
Sophomore captain and defender Billy Werthman is looking to win it all this season.
“The goal from the beginning of the season has been winning a national championship, and we will do that,” said Werthman.
Moving forward
As returning players work hard all season to redeem themselves from last year setback at the National tournament, many freshmen have stepped up their game with the entire team desiring one thing, the National Championship. “David Tetaj, Aidan Shennan, goalkeepers Cameron Quinn and Jose Jimenez ,Ian Walker and Connor Rutz—all of these guys carry themselves like veterans already this early in the season,” commented head coach Rick Larson.
The incoming players have nicely fit into the chemistry of the hopeful Ocelots, fighting for a victorious season.
“Teamwork has been a key strategy in theses victories,” said freshman defender Kebba Sanneh.
For more information on the games that occurred after the publication deadline of September 26, go to www.schoolcraftconnection.com.For stats, schedules and rosters visit www.MCCAA. org.