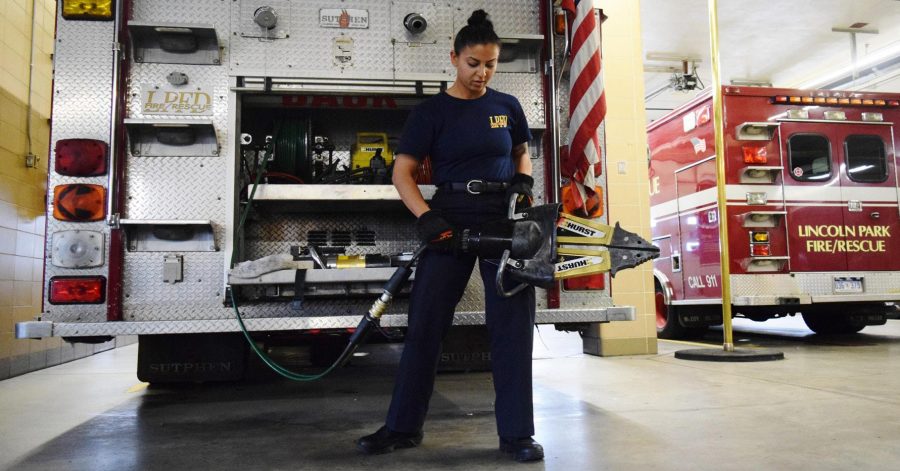 Fire Technology alumna Mona Markabani becomes first Lincoln Park Arab-American firefighter
BY CAMYLE CRYDERMAN
MANAGING EDITOR
Thanks to Schoolcraft College’s real-world applicable programs and caring staff, many students have graduated and gone on to do great things with their career. Not often does a student make history though. Mona Markabani is one of these rare history-making alumni. After graduating from the Schoolcraft Fire Academy in November 2014, she went on to become the city’s second female, first Arab-American and youngest firefighter ever at the Lincoln Park Fire Department.


In the tough career of firefighting, it takes a lot of passion to continue day to day. Markabani has had this passion for as long as she can remember and continues to display it with each task she performs.
“I realized I wanted to become a firefighter at the age of seven,” said Markabani, who is now 24-years-old. “I was in an elementary school assembly, learning about fire safety, and one of the fire fighters happened to be female. That is when it stuck with me, and I continued on believing in my dream until I finally achieved it.”
Her own hard work and dedication played a big part in her accomplishing her goal of becoming a firefighter, but another important aspect was the Schoolcraft Fire Academy. The academy and pro-active instructors provided Markabani with all the tools needed to become successful in her field. Aspects like the hands on fire training prepared her for fighting flames in the most efficient way possible. A strict ranking system used in actual fire departments that the academy utilizes as well also gave her a taste of what a real department would be like. Markabani received exactly what she needed to take what she learned into the real world and transition smoothly from classroom to career. On July 16 she did just that when she was sworn in by the Lincoln Park Fire Department (LPFD).
“Mona was hard working and determined. While she was at the Fire Academy, she placed in the rank of Guidance Officer which is the fire academy student who is the Liaision between the class and the instructors. She was able to keep her class organized and help other students strive towards success during her time in the fire academy,” said Schoolcraft Fire Academy instructor and retired LAPD Fire Caption Mike Harper.
Before attending Schoolcraft, Markabani received her Associates in Applied Science in Paramedics from Henry Ford Community College in 2014. While there she was the chairwoman of the Paramedic Program’s Hospitality Committee and went on to work as an emergency medical technician (EMT) and paramedic for HealthLink in Taylor. Firefighting was always her dream job though, but it took a grueling seven-month wait time after her application to be hired.
Although she has been working at the LPFD for less than four months, she is already an integral part of the team.
“She came in with her personality and hard work ethic, and she’s fitting right in,” said Lincoln Park Fire Chief Al Dyer in an interview with The Arab-American News.
By learning from her fellow firefighters who have many years of experience, Markabani is becoming more knowledgeable every day. While she is still a probie (a term commonly used by firefighters to identify a probationary/ rookie firefighter) she continues to strive for more with great excitement.
Markabani has been out on several small fires during her short time at the station so far, but she is still waiting for her “big fire.” When not out in the field, she is studying city maps going over the equipment and even reviewing ems material. Although it is a tough job, she enjoys the outcome of making someone’s bad day a little bit better.
“What keeps me going is self-motivation, positivity and determination,” said Markabani. “The rest of the guys at the station, they push me to do my best every day.”
It’s not every day that people achieve their dreams, so in cases such as Markabani’s, one can look at her with admiration. Due to a passion, hard work and dedicated instructors helping her along the way, she was able to make history. Young people have this opportunity every day, but are sometimes squelched by reality. Follow the lead of Markabani and make a dream into reality.
“Never give up on your dreams, no matter how many hurdles you come across,” said Markaboni. “If you have your mind set on a certain path, go for it. Do not let anyone stop you from pursuing your goals. In the end, it is your future and your happiness, nobody else’s.”
Delete Image
Align Left
Align Center
Align Right
Align Left
Align Center
Delete Heading