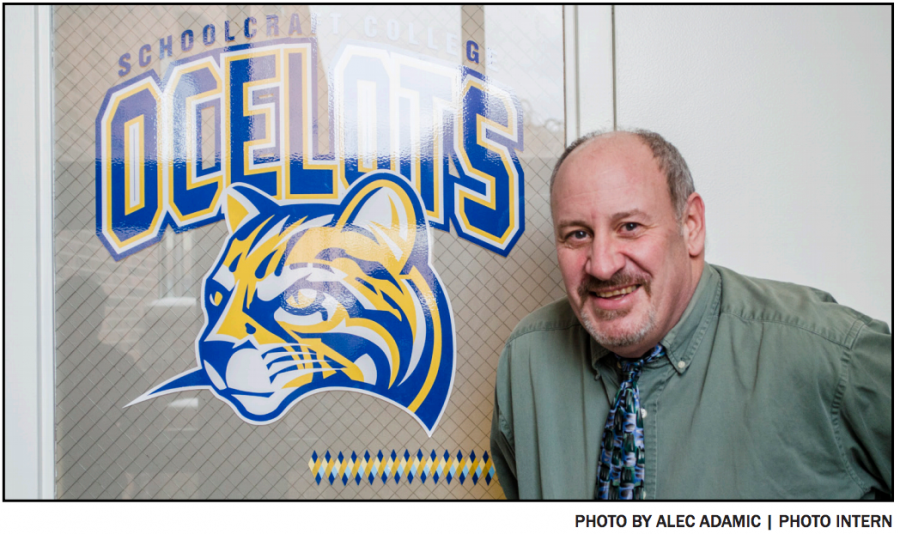 
Schoolcraft College lost one of the best coaches in their sporting history when Cross Country coach Edward Kozloff retired after the conclusion of the 2015 season. However, newcomer Wright Wilson was awarded the opportunity to step up and will shine new light on the team when he begins coaching during the 2016 season. With this drastic new change in the sport, Schoolcraft cross country has an exciting year of firsts ahead of them.
Wilson graduated from Central Michigan University in 1985 with a journalism major and a certificate in teaching. He began working at a local radio station and student teaching at Grand Rapids Central High School.
“Broadcasting has been a hobby of mine since I was a kid,” said Wilson. “It has always been fun and you make more friends in this profession than any other.”
Wilson ran Cross Country and track throughout High School at St. Clair Shores and has always loved running. He then started coaching cross country and track at different high schools in the area to carry on his passion for running until he found his one true home at Royal Oak Shrine Catholic High School in 1989 when he began coaching there.
Wilson coached men and women’s track at Royal Oak Shrine from 1989 to 2015. He won statewide men’s coach of the year in 2007, has coached 16 state champion athletes and led the boys track team to a state-runner up title in 2007.
“Wright Wilson has had an illustrious coaching career during his tenure at Shrine High School,” said Sid Fox, Schoolcraft Athletic Director. “I am sure he will help make better athletes here at Schoolcraft.”
Wilson has lived his life through running and helping others improve their running, but has also been involved with the broadcast and radio world for a long time.

He has been a prep sports reporter for the Detroit Free Press since 2002 and was a freelance reporter for the Oakland Press, Macomb Daily and Royal Oak Daily Tribune.
He also has been the Prep Sports Public Address Announcer for many different Colleges and High Schools. He works with the radio station “Cars 108” in Flint, Michigan playing Flint’s favorite Adult Contemporary Rock hits.
Coach Wilson has been a proud member to many broadcasting and sports reporting agencies; he also has been a notable member to many running organizations including the Motor City Striders. The Motor City Striders is an organization that teams up to do local races in the Detroit area, this is the group who held the first Marathon at Belle Isle. Wilson’s interest in running has become an addiction as he has participated in 128 sanctioned races including 5k and 10k events.
“Running has been a hobby of mine and has helped me get through a lot in life,” said Wilson.
With a coaching career better than most and a broadcasting portfolio still expanding, Wilson has a lot of successful years to come. He hopes to turn average runners into National Competitors as soon as he can here at Schoolcraft. “I’m excited to see what Coach Wilson can do and how he can help me and all the other Cross Country Runners,” said Freshmen cross country runner Caitlin Goyer.
Former Cross Country coach Ed Kozloff left an impressive legacy with many National runners on the Schoolcraft team. Wilson has inherited a program filled with history and is striving to improve the program even more. With his vast running history and excitement for the future, the Schoolcraft Cross Country team is looking forward to having a successful first season with Wilson on board.
Delete Image
Align Left
Align Center
Align Right
Align Left
Align Center
Delete Heading