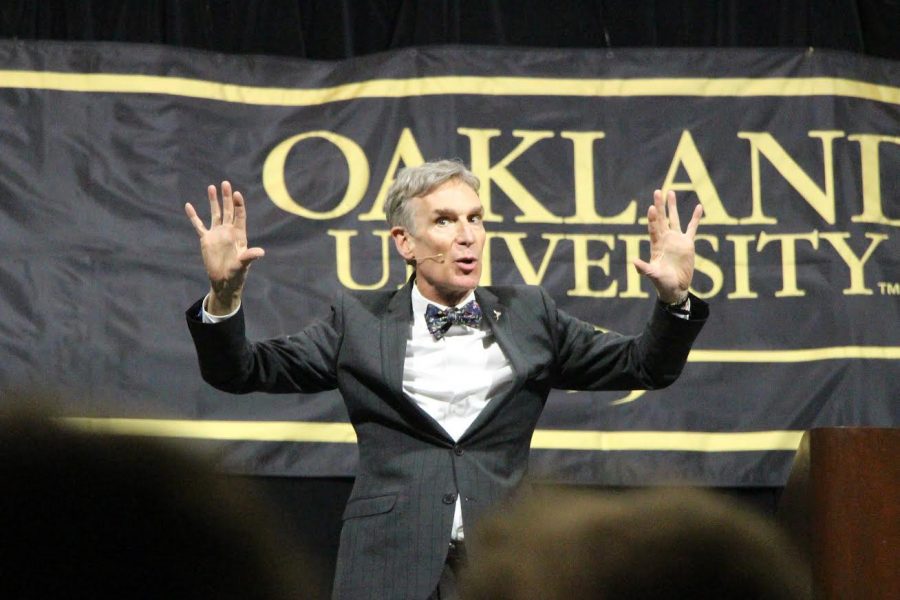 Bill Nye ‘The Science Guy’ speaks at Oakland University
By Kim Sorenson, News Editor
Bill Nye ‘The Science Guy’ is an icon for most American millennials. Nye’s television show inspired countless kids to pursue careers in science, and he is still just as charismatic and inspiring despite the shows end. On Monday, March 14, about 3,000 lucky people were able to attend Nye’s speech at Oakland University’s O’rena. The event kicked off at 7 p.m.,  with Nye delighting the audience for an hour and 45 minutes.
Nye started out his lecture with a brief overview of his family history. His father was a Johns Hopkins graduate and a prisoner of war for 44 months during the second World War. His mother was a graduate of Goucher College, Johns Hopkins’ sister school, and became a codebreaker for the United States during World War II. After the war, his parents were married and his father had become an expert on the stars and sundials from his time as a prisoner of war. His point of telling the audience about this was to explain how he introduced the idea of adding a sundial to the camera balancing devices for the Mars Rovers, which is the only way to determine north and south on Mars as well as the time.


As the CEO of the Planetary Society, Nye is obviously very knowledgeable about the solar system. He educated the audience about various space related topics, such as the amount of time that space travel takes. The spacecraft that took pictures of Pluto was launched back in 2007, and finally got to Pluto last summer in 2015. The audience also learned about the theory of liquid water on Mars. Pictures show an empty gully for part of the Martian year, and what appears to be running, liquid water in that same gully at other times of the Martian year. According to Nye, that happens at the same time every year. Nye’s enthusiasm for space was evident, and impressed upon the audience how important space exploration is for the world.
“Space exploration is the best way to answer questions about ourselves,” said Nye, “It is the only way we can answer the two big questions we have, which are; ‘Why are we here?’ and ‘How did we get here?’”
The biggest take-away from Nye’s speech was how detrimental climate change is for the planet. He explained how draining Earth’s seven billion people are on the planet’s resources, and how even one degree differences in the planet’s temperature has massive impacts on the climate and ecosystems. Nye spoke at length about renewable energy sources, and how millennials can spur the revolution to have 100% renewable energy used nationwide by 2050. Though he did not say any names, he advised the audience that all of the republican candidates for president deny climate change, and how detrimental that could be for the planet.
Though Nye’s ‘Science Guy’ days are over, he is still an inspirational scientist changing the perspectives of students all over the world. He is an enigmatic, charismatic speaker with fantastic comedic timing. Even in a packed arena, he spoke in a way that made the audience feel as if he were talking to them one-on-one. His intentions are pure and his message was clear; the world needs to be changed, and this is the generation to change it.
Delete Image
Align Left
Align Center
Align Right
Align Left
Align Center
Delete Heading