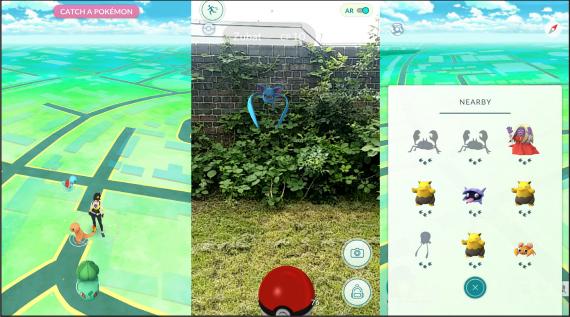 The newest interactive app from Niantic that continues to gain popularity since its July 6th release is “Pokémon GO.” The game is a free-to-play, location based augmented reality game where players use GPS capability to locate, catch, battle and train virtual creatures, called Pokémon. The game forces users to get up and go out into the world to explore and find these animated creations. The game was released to mixed reviews with praise for its concept and incentive to become more physically active within the real world, but it has also faced many struggles.
Within the first few weeks of the games launch, major technical difficulties became apparent such as the servers crashing frequently. Accidents and concerns from several governments have also been problematic. The real question being, is the game really worth it?
Pokémon was originally created by Satoshi Tajiri in 1995. The franchise began as a pair of video games for the original Game Boy in 1996. It has since grown into multiple video games, trading card games, animated television shows, movies, comic book series and toys. Over the years it has become the second most successful and lucrative video game based franchise in the world. Branch off series of the original “Pokémon” such as red, yellow, blue, diamond and silver, as well as next generation series have all held popularity throughout the twenty years since its creation among several generations.
This newest game is not all it is cracked up to be.
Yes, the game is fun to play and gets users to be physically active to find all of the rarest and multitudes of Pokémon there are, but there is always a downside. The first issue the game faced shortly after its release was the constant crashing of the servers due to heavy usage and popularity. Even as the time goes on, many users still face issues of servers running slowly or crashing during periods of time where hunting traffic is heavy or in highly populated areas.
The app is becoming dangerous at times for users as well. To capture the rare creatures that are so desired and coveted, players must travel to unpopular areas that relate to these creatures environment such as water or forest and rural settings. Many reports of injuries from falls and accidents on bikes, skateboards, cars and walking due to lack of paying attention because of the app on the phone are common according to the New York Post.
Criminal activity is taking advantage of the app as well. Teens and young adults using the app and traveling to areas either late at night or to areas that are under populated has had phones stolen or have been put into other dangerous situations have all been reported according to Syracuse.com.
The game is an innovative idea. Viewers should keep in mind though to always be aware of their surroundings while playing the app. Travel with others in big groups while hunting. Use the app as a time to socialize with others and look up from the phone. The safest way to play is while walking. Avoid playing the game while driving or even riding a bike or skateboard. It is okay to have fun and catch them all, but be safe and aware while doing it for oneself and those around them as well.