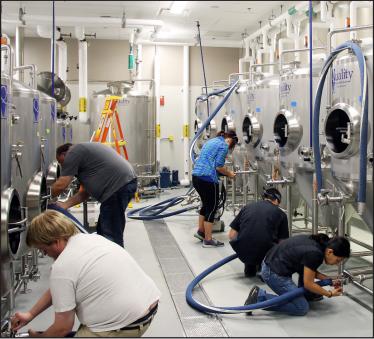 Brewery and Distillation Program provides opportunities for entrepreneurs
BY QUINN STORM, NEWS EDITOR
In the United States there are 20 colleges with brewery programs, according to the Brewers Association, and Schoolcraft is now one of them. With only two other colleges providing programs in the state, it is safe to say this program gives the colleges unique advantage, while continuing to prove that community colleges providing students with the degrees and certificates that will give them an upper hand in the brewing industry just as well as a university may be able to do.


“The program here at Schoolcraft does come with more than just making beer. It covers everything from beer production all the way through selling, marketing, sensory, dealing with the public, business, all those different aspects. So it gives you a more rounded experience. It can be applied in whatever field or aspect of the industry you end up in,” said Brewery program instructor Ken Belau.
The Schoolcraft Brewing and Distillation Technology program is a 24 credit hour program where students receive a certificate after completion. Before production started the students were still using valuable time to be in the classroom for lecture. The program is 30 hours of lecture and 30 hours of hands on learning.
“This program gives them [the students] a good baseline to open their own, and then easily be able to transition to working in a brewery,” said Master Brewer and Director of Brewing and Distillation Technologies, Tom Block.
This program gives students an opportunity to transition from a hobby of brewing at home to actually learning the business and trade and one day opening their own company.
The Brewing & Distillation Technologies program is separate from the Culinary Arts program., However, it gives students many of the same strengths and skill sets as the Culinary Arts program. Students learn the process of brewing, the business aspect and get hands on experience in creating their own brewery and flavors. In all, this gives students in the program the experience that they need to be successful in the field.
Production for the brewery started the week of September 12. After the production commences, then the selling of the actual product on campus actually initiates. Since brewing is about a two week process, selling at American Harvest, the on-campus restaurant, will not begin for another few weeks. It is prospected to be up for sale by the beginning of November.
When asked about the production and selling of the product, Block said, “We will start on serving in the international lines, which is Thursday and Friday nights. Eventually, we’d like to get the doors open a couple more days a week to be able to sell the beer. Maybe in the winter semester, we’ll have a couple more days open- Saturday, Sunday we’re looking at.”
In addition to selling in the restaurant, the instructors hope to be able to sell bottled beers in the reach in cooler outside of American Harvest. Though the culinary and brewing programs are separate, they will still be working together to provide people with good tasting food and beer, available right on campus.
To begin the course, the brewery is going to start with five batches of beer and hopefully work their way up to eight towards the end of the fall semester. With the hands on experience, students learn the process of brewing their own beer. These 30 hours of instruction teaches the process of making the beer: putting the brew into a fermenter, adding yeast and letting it ferment for five to ten days, chill the brew, move it to a bright tank to clarify and carbonate the beer and then keg and finally bottle or can the beer.

When asked why he was interested in Schoolcraft’s brewing program, Brewing and Distillation Technology student Nick Cornell said, “I needed a way into the industry. That [opening my own brewery] is the end goal.”

Like many other classmates, Cornell is looking to turn a passion and hobby into something more profitable.
Schoolcraft’s exceptional programs and teaching create a great environment for students and along with the additional fact that Schoolcraft only has two other competing schools in Michigan that offer brewery programs. This brewery is expected to attract many students who are looking to learn the trade for years to come.