Break a sweat while breaking a record 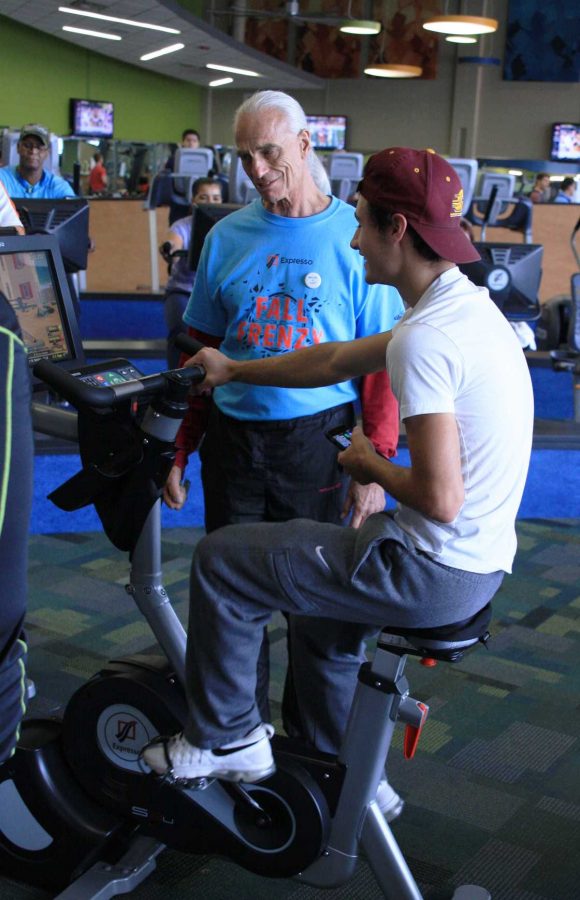 Fall Frenzy competition returns to campus
BY QUINN STORM, NEWS EDITOR
As of Oct. 4, Fall Frenzy has raced into Schoolcraft. Hosted by Expresso, this competition gives colleges around the country an opportunity to compete against one another for the title of Expresso Champion and the honor of receiving the Golden Spokes Fall Frenzy 2016 trophy.


“Fall Frenzy is an event that has the ability to bring the whole campus community together for ‘Team Schoolcraft.’ For up to five weeks, students, faculty/staff, Fitness Center members and members of the community can come together and work toward a common goal of winning a national biking challenge, that involves competition against other colleges throughout the country. It’s fun, it’s exciting and it’s an event that the Fitness Center staff looks forward to promoting and facilitating every year,” said Patty Donohue Ebach, Fitness Center Manager.
Every Tuesday and Wednesday for five weeks, the Fitness Center hosts 48 hour periods where participants can go in and bike ride as many miles as possible. Every round starts and finishes at midnight on each of the days. In a bracket competition, schools are placed against one another and the team, or school, which rides the most miles, moves forward while the other is eliminated from the competition. Oct. 4 and 5 was the Qualifiers round, Oct. 11 and 12 was the Super Sixteen, Oct. 18 and 19 is the Electric Eight, Oct. 25 and 26 is the Fearsome Four and Nov. 1 and 2 is the Championship. After each round there are teams cut and the ones who are thriving move onto the next round.
“Besides the physical benefits and the individual goals for course times and mileage, the competition brings students, alumni and community fitness members together for a common goal. So that brings a positive and energetic environment and fosters a sense of community instead of people normally coming in and doing their different set of workouts. It’s also great for Schoolcraft to be recognized nationally among other colleges, universities and recreations,” says Lisa Cunningham, Fitness Center Assistant Recreation Manager.
This year marks the fourth annual year of the Expresso Fall Frenzy; Schoolcraft has entered this competition every year since it began in 2013. Two years ago, the college came in first place in the competition and last year the college placed second overall. Hopefully, this year will be another year where Schoolcraft takes home the first prize of $500 and the Golden Spokes trophy, one of which is currently displayed in the Fitness Center. Another incentive for contestants, riders receive a ticket every ten miles of biking, and a drawing will be help at the end of the competition for one racer to win a $500 prize. The top 25 riders in the college will receive custom t-shirts. Finally, if the college reaches into the Fearsome Four portion of the competition it will be awarded with a plaque of honor.
“It’s just a lot of fun. It helps you stay active and you get to meet a bunch of cool people and it’s just a really great time,” says Luke Wellman, science major, who is a participant in this year’s Fall Frenzy.
To bike in the tournament, a rider has to create a MyExpresso account by registering online. Also, riders must make sure that they are completing their laps and biking on the correct mode because incomplete laps, guest rides, training mode and Dragon Fit game miles will not be put toward the team’s total miles in the tournament.
Fall Frenzy is bringing a competitive buzz to the Fitness Center as participants compete to push the college into first place. Anyone interested in competing can head over to the Fitness Center for more information and pick up a packet on what Fall Frenzy is all about. As Expresso says, “The Roads are Digital, but the Sweat is Real.”
Delete Image
Align Left
Align Center
Align Right
Align Left
Align Center
Delete Heading