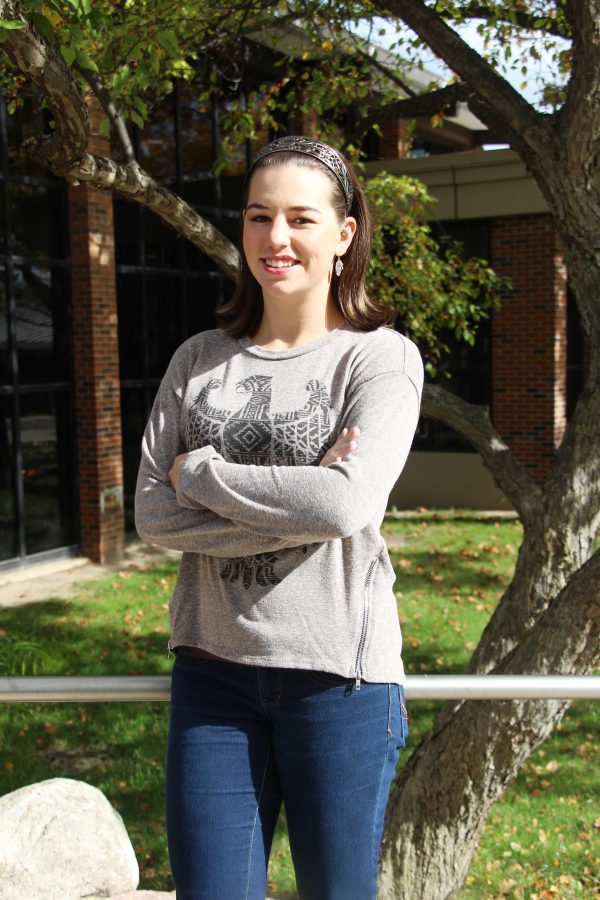 Student Kaylin Janiczek entertains crowds around Michigan
By Dylan Randolph, Editor-in-Chief
Many students at Schoolcraft have multiple jobs from working as a school employee or being a waiter in a restaurant or retail. While many students simply work just to pay for college or other necessities like rent and car payments, Schoolcraft Nursing student Kaylin Janiczek has found a way to not only provide for herself but have fun in the process. Janiczek has started her own business in face painting while also being a stilt walker at many community events.
Young entrepreneur
Janiczek started a face painting business called KJArt when she was 14 years old while working at Salem High School’s softball concession stands. An agent of DMZ studios who also happened to be a face painter approached her. After speaking with the agent from


DMZ regarding their love for face painting, she was offered the chance to attend an elementary school event and help with painting. It was after this experience Janiczek knew that she found her passion.
“I branched out on my own. I bought my own business cards and bought my own supplies and ever since then it’s been me myself and I running my business,” said Janiczek when asked how she established her business.
Janiczek has experienced success with KJArt including attending private and public events within the community. Although most of her business has come from her specialty of face painting, she continues to broaden her horizons any chance she gets.
Finding a Partner
This past July, KJArt teamed up with Pzazz Entertainment to attend public events and receive training in stilt walking. The duo teamed up back during Plymouth’s Art in the Park when Janiczek started to talk to the owner of Pzazz Entertainment who was dressed up as the Queen of Hearts from “Alice in Wonderland,” her favorite movie. As their conversation seemed to be coming to a close the owner of Pzazz Entertainment took her under her wing and began to train her on stilts as well as becoming Janiczek’s agent.
“She (Janiczek’s agent) put me through bootcamp. We had to practice walking on stilts through all sorts of terrain with all different people. We even had to practice jumping on stilts,” said Janiczek.
KJArt and Pzazz Entertainment have had much success with their collaboration attending many different events throughout Michigan. Janiczek has performed stilt walking at Milford Memories, a Mercedes Benz event and during the Michigan State Fair Parade, while also being able to practice her face painting as well.
Although she does this as an alternative job to being a lifeguard at LifeTime Fitness gym, she is truly in it for the reactions from the people she paints.
“When I’m finished with whatever they want, and sometimes they want me to surprise them; I show them their face in the mirror and it’s like the reaction of getting a little puppy and it’s fantastic. It’s not only fun for me, it’s artistic and I get to put a masterpiece on someone’s face. And every little kids’ reaction is priceless” said Janiczek as she expressed the joys of her job.
Other modes of transportation
When she isn’t walking on stilts or transforming faces with painting, she finds time to cool down through biking. Janiczek’s love for biking started when she was a kid. Not being able to drive around in a car that was her main mode of transportation. Not only that, but it gave her an alternative route to explore and get away from the busy life as she biked down dirt pathways, through forests and along creeks.
Kaylin Janiczek has found a job through a passion she has had since she was a young. Whether it is walking around in the sky on her stilts or transforming a little girl into a tiger, she brings smiles to the community while fulfilling her own goals. Her words of advice come from famous children’s author Dr. Suess as he said, “You have to be odd, to be number one.”
For face paiting services contact KJArt by email at [email protected] or by phone at 734-812-2246. For stilt walking please contact 248- 330-6428.
Delete Image
Align Left
Align Center
Align Right
Align Left
Align Center
Delete Heading