Breakaway into a new season 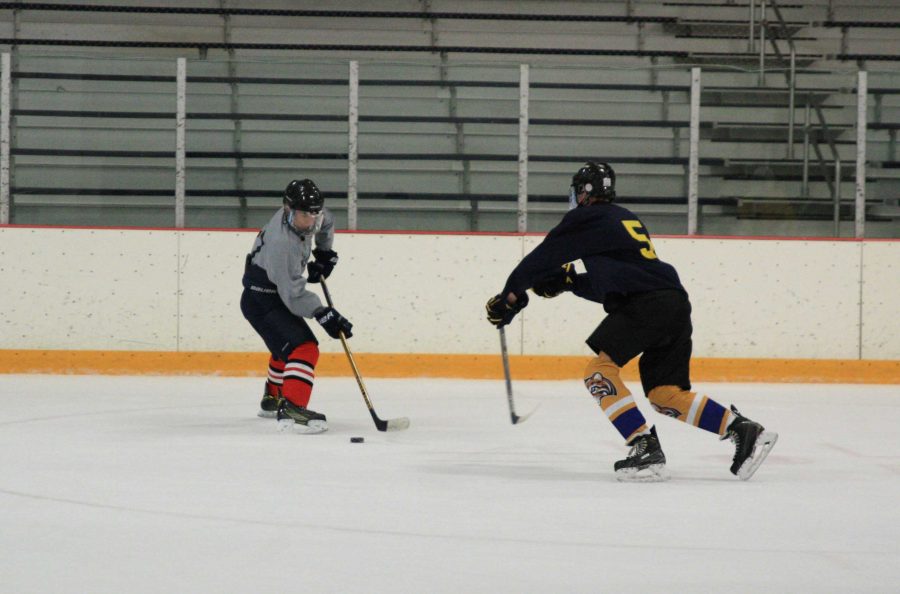 Schoolcraft Hockey rebuilds, ready to dominate
By Elizabeth Casella, Managing Editor
Nearly one year ago in the fall of 2015, Schoolcraft debuted a new club sport to its student body. Thanks to the effort of three students, Andrew Lindsay, Sheldon Varhol, and Brendan Barger, the dream of having a men’s hockey team became a reality for the first time in the history of the college.
The 2015-16 season was a work in progress for the Ocelots, but one that they learned immensely from. Building a team from the ground up is no easy task but the combined efforts of Lindsay, Varhol and Barger and the rest of the team kept the dream alive.


Through hard work and dedication the team was able to gain sponsors, rink time and the pieces to the puzzle that got the team off the ground.
Season one for the Ocelots ended with a record of 8-10-2. The team experienced many highs and lows throughout the season but the foundation was set for year two of the program for the 2016-17 season. Through word of mouth and dedicated players and coaches willing to recruit, the team was able to accomplish even more than they hoped for in the offseason.
“Getting the program on the map with a lot of help definitely was hard, but building off of that now can help the team. Thanks to the Student Activities team and support from sponsors as well as the coaches, we were able to achieve a lot of groundbreaking last season to set us up for success this season,” said Captain and forward Andrew Lindsey,.

Moving Forward
This season started with over 60 players’ attending tryouts all vying for a spot on the Ocelots roster. Players trying out came from diverse hockey backgrounds and offered immense talents. In the end the roster was trimmed down to 29 players, including ten returning from last seasons squad. With 19 of the 29 players on the team with freshman status it will be a building year for the Ocelots. However, these players have already proven to bring immense talent to the team..
“Compared to last year this team has come a long way. Not only our skill on the ice but also our coaching staff. We are all looking forward for this year, I think it’s going to be a good one,” said forward and Assistant Captain, Sheldon Varhol.
Meeting the team
This season’s roster is filled with talent on both sides of the ice, offensively and defensively. Some notable returners this season are forward Vince Glenn and defensemen Andrew Nowak, both from Livonia Stevenson and Assistant Captains. Sheldon Varhol, and forward Derek Klisz also return bringing veteran leadership. All of them work very hard at practice and are mentoring the first year players as they transition into the program.
Notable first year players include forward Zachary Goleniak (Salem High School) who has started to show real promise by putting points on the board and driving to the net. Additionally, Zachary Nichols (Gabriel Richard High School) is currently leading the team in points and recently switched positions from wing to center. All the players are building chemistry with each practice , which will contribute towards a successful season.
“Some key things the team is focused on is having a strong, organized defensive zone and focusing on staying positive throughout the whole game,” said Glenn.
Season two is off to strong start. Currently the team has played six and currently has a record of 4-2. The Ocelots are looking to build momentum with each game that translates into a winning record and in time hopefully will allow the Ocelots to clinch a spot in the

American Collegiate Hockey Association (ACHA) playoffs. Their focus not only is on improving their skills on the ice, but bonding as a team off the ice as well. They want it to be more than just about hockey, but a true team experience all around.
“On the ice we have improved substantially whether from it’s from a team stand point or even by individuals. We are still doing a bit of line juggling just to see who plays well with other and to see if that chemistry is there as well. There are still a couple kinks in the chain but nothing is ever perfect. There has been an abundant amount of improvement but it never ends. It’s a process and I can’t wait to see what the future holds for this hockey program,” said Nowak.
The team encourages all fans to come out and attend some games this season.
The next home game will be on Nov. 5 at 7 p.m. at the Redford Ice Arena. The arena is located at 12400 Beech Daly Rd, Redford Charter Twp, 48239.
The team plays in the American Collegiate Hockey Association league in Division 3. Teams such as Saginaw Valley, Washtenaw Community College, Michigan State University, the University of Michigan and Central Michigan are all competitors the team will face this year. For more information on team stats and schedules visit www.achahockey.org.  Also like them on Facebook Schoolcraft College Hockey Club.
Click here for a copy of the roster and schedule.
Delete Image
Align Left
Align Center
Align Right
Align Left
Align Center
Delete Heading