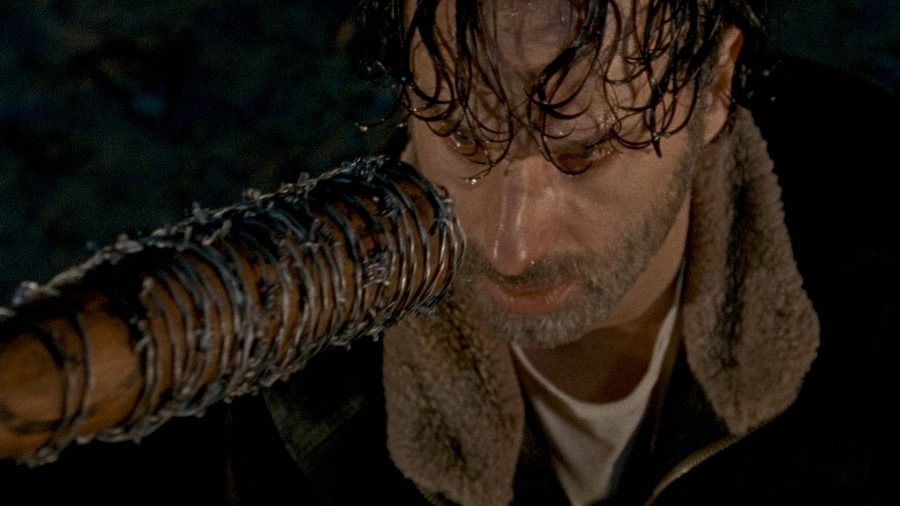 “The Walking Dead” season seven premiere huge hit with fans
By Dylan Randolph, Editor in Chief
Rate: 5/5
Airing Oct. 23 at 9 p.m. “The Walking Dead” season seven premiere shook audiences all over the world as they tuned in to see whom Negan (played by Jeffery Dean Morgan) killed at the end of season six’s cliffhanger. What would soon follow the beginning moments of the episode would shock fans to their core due to the pure grotesque nature of the following events, while also leaving fans on the edge of their seat.
The opening scene of season seven showed Negan holding his bloodied bat that he has named “Lucille” in front of the face of Rick Grimes (played by Andrew Lincoln). Although viewers could not see which one of the survivors had been brutally beaten, it was clear there was less now than there was to start with as Rick’s face was covered in someone else’s blood and the remaining survivors sat with tears or expressionless faces. Rick would soon whisper under his breath that he was going to kill Negan, “Not today. Not tomorrow, But I am going to kill you.” Negan did not take too kindly to Rick’s statement and forced him into an RV where the two would then drive away into an unknown area away from Negan’s group and Rick’s survivors.


Once Negan and Rick arrived at their destination Negan needed to prove a point to Rick to show him who would be in charge from now on. He threw an ax out of the RV and told Rick to “Bring me my ax,” as Rick had to face off hordes of zombies in order to retrieve the weapon. However, as Rick would face the walking horror that surrounded him, he would flashback to the loss of his close friends.
Fans were then transported back to the cliffhanger of season six, except for this time the camera was in Rick’s point of view. Fans watched as Negan walked to each character playing “Eenie Meenie Minie Moe” in order to decide which survivor he was going to have to kill to set an example to the rest of the group. At the end of his sadistic nursery rhyme he ended viewers’ months long wait to see whom Lucille had chosen as he stepped in front of Abraham (played by Michael Cudlitz). Without warning Negan cocked back his arms as far as he could and brought the barbed wire bat down onto Abraham’s head. Negan would then continue to viciously bludgeon his lifeless body until all that remained was a bloody numb where his head used to be and a limp body sprawled out in front of the survivors.
What happened next still shocks lovers of the show so much so that some claim to never want to watch the show again. Once Negan was finished mutilating Abraham’s corpse he proceeded to show off his blood soaked bat to the remaining survivors. Daryl (played by Norman Reedus), unable to contain himself any further, jumped toward Negan, striking

him in the face. After Negan’s henchmen pulled Daryl away, Negan made sure that something like this would never happen again. Without any warning whatsoever, Negan turned toward Glenn (played by Steven Yuen) and bashed his skull in, causing blood to gush from his head and his eyeball to hangout. Unable to fathom what just occurred, the survivors sat in silence as Glenn looked at his wife Maggie (Lauren Cohan) and tried to say his final words to the mother of his still unborn child. All Glenn could get out was “I’ll find you” before Negan would continue his destruction of the beloved character.
As if the slaughter of Rick’s two friends were not enough, Negan would then close the epsiode by giving Rick the choice to cut off his own son’s arm, or having all the other survivors shot in the head. Right before Rick was about to lop his son’s arm off, Negan stopped him proving that Negan was the one who controlled things for now on and any resistance would only end in death.
The Walking Dead has finally shown what the world would actually be like in the zombie apocalypse; showing that all hope of mercy and remorse would be disintegrated in order for people to get what they want/needed to survive. Although viewers were horrified to the point to where some say they will never watch the show again, due to explicit killing of two of the characters, many will still tune in to AMC each Sunday at 9 p.m. to see just exactly how Rick’s group is going to fight back against Negan in the upcoming season.