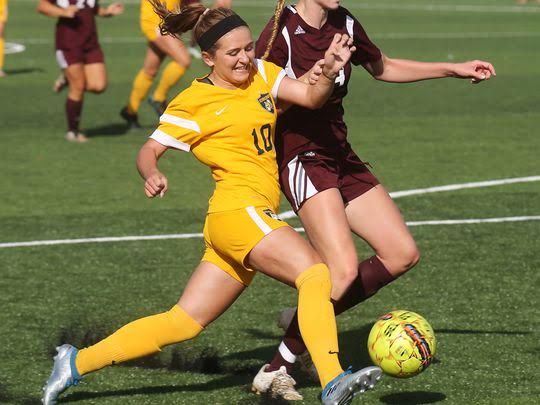 Women’s soccer wins Region XII title, clinches berth in National Tournament
By Chris Skarnulis, Arts and Entertainment Editor
Another weekend of success was graced upon the Women’s soccer team. The team’s overall record is 15-2 and their conference record is 10-0. Over the weekend of Oct. 29, the team faced Muskegon Friday and Cincinnati State on Saturday The team secured victories in both games against familiar rivals. They are back-to-back Regional XII champs and headed to Nationals for the second consecutive season under the coaching of Dave Carver. Next up is a trip to the NJCAA nationals, slated to take place in Melbourne, Fla. from Nov. 14-19.


Breaking Cincinnati
The Ocelots faced opponent Cincinnati State in Grand Haven following the team’s victory against Muskegon Oct. 30. The Ocelots were in for a fight when Cincinnati scored a goal immediately in the beginning of the first half at the 36-second mark. However, the team made a quick recovery at the 14-minute mark when sophomore forward Katie Vitella scored with an assist from freshman forward Eliss Jenkins.
Jenkins was proud that the team was able to keep up despite an early score from Cincinnati. She felt the team good defense.
“Although Cincinnati State was able to score early on, I was really proud of how our defense and offense played. This game was a test of how we handled Cincinnati’s tactics, which I felt we handled well,” said Jenkins.
The second half started off quiet until the 49 minute mark when sophomore midfielder Raven Buck scored on an assist from freshman forward Lauren Wynns. The goal was put in corner kick rebound. Later on in the second half, at the 82-minute mark, Smith scored unassisted on a penalty kick. The Ocelots claimed another victory against Cincinnati State with a final score of 3-1.
Wynns felt she and the team had good chemistry on the field. She attributes that to the team playing well together.
“Because our team has such a good bond, we have a great time playing together. We trust each other with the ball, which proves effective when we play against tough opponents such as Cincinnati State,” said Wynns.
Blowout Muskegon
The Ocelots faced Muskegon in the Region XII semifinal on Oct. 29. Leaving Muskegon without a chance to score, the game was an easy victory for the Ocelots. Freshman midfielder Emily Bondy scored early in the first half at the 18-minute mark. She scored unassisted; the ball was shot from 30 yards out, hit cross bar and went in. The remainder of the first half was a game of defense. The Ocelots faced little resistance from Muskegon, leading to the conclusion of a quiet first half.
Toward the end of the second half at the 84 minute mark, freshman forward Jenna Smith scored with an assist from sophomore midfielder Raven Buck. The goal was put in rebound over keeper. The Ocelots claimed victory with a final score of 2-0. They moved forward to face Cincinnati State the following day.
Coach Dave Carver felt the team prepared well for the game. He felt confident that the team was ready when they faced Muskegon.
“Our team had a great game. The girls have been having a great season. This victory gives us motivation in the midst of the National Semi-Finals,” said Carver.
The team will be advancing to the National Finals in Melbourne, Florida in the coming weeks.
Delete Image
Align Left
Align Center
Align Right
Align Left
Align Center
Delete Heading