Pay for your own stadium 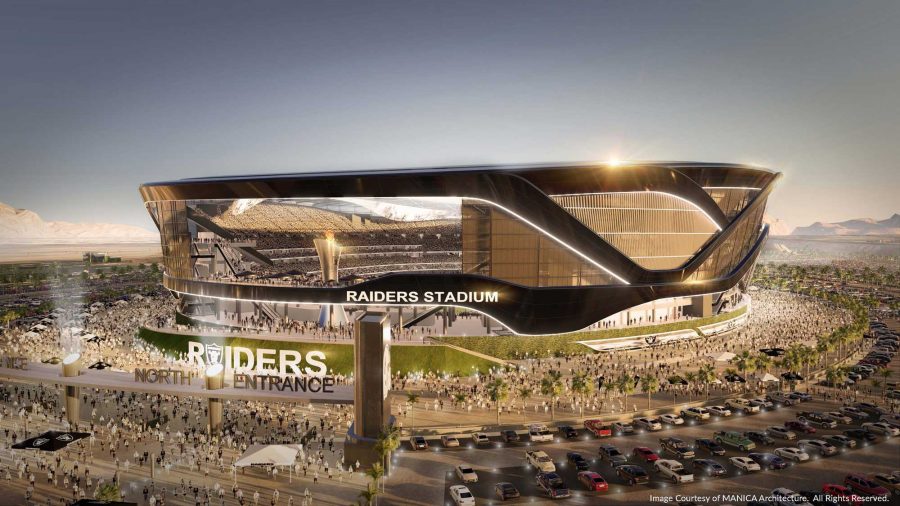 Las Vegas is more focused on athletic stadiums than their school system and the benefit of their city. (Image from the Architecht's Newspaper)

The wrongdoings of publicly funded stadiums
By James Paxson, Sports Editor
There are a lot of variables that go into making a sporting event exhilarating. There is of course the team that is playing; that is the entertainment that a fan is paying their money to go see. The other immunities include food, pricing, the other team that is playing etc. Fans and people who do not love sports in the Las Vegas area have the possibility to pay for a stadium with their own tax money.
According to News3LV’s Nathan O’Neal, “The Southern Nevada Tourism Industry Committee has unanimously approved $750 million in public funding to construct an NFL stadium for the Raiders in Las Vegas.”
Now there are many problems with having a professional stadium being built on a working family’s tax money, but what is even more awful is that in more times than not a person who oddly enough has the money to build the stadium pushes the idea. This idea is set in the hands of Republican donor Sheldon Adelson. According to Forbes.com Adelson has a net worth of 31.6 billion dollars. A person with $31.6 billion to their name has the ability to team up with another business man or, even better, pay for the stadium themselves. The state of Nevada could use this much needed tax money to improve other parts of the state instead of bringing a football team to cherish.


According to leg.stats.lv Nevada currently ranks number 50 in all states surrounding education. This is marked as last under all United States education states over the last year. The state is under very disappointing reviews involving their school system; they received a grade of a C- for their average education rank. This leads many citizens to want to put the citizen’s tax money to a better cause than a football stadium. This leads a lot of people to believe that rich politicians and higher class people will put sports over education. If this is the case what else will be put under sporting events?
Now of days publicly funded stadiums do not make sense; most tax related issues with education are roads, police funding, safety and government funded activities. Here in Livonia, Schoolcraft College just opened their own personal athletic dome on Nov. 4. According to the Schoolcraft College Website the Athletic Dome is privately funded by investors; which mean that people using the Dome in Livonia and Schoolcraft Athletics are paying for the arena, not people who do not want it.
There should be no more publicly funded sports stadiums; there are enough wealthy owners who can cover the tab for a new sports arena. These men in Nevada are losing the opportunity to make the state become a functionally profound community filled state; instead of a gambling hot spot.
Delete Image
Align Left
Align Center
Align Right
Align Left
Align Center
Delete Heading